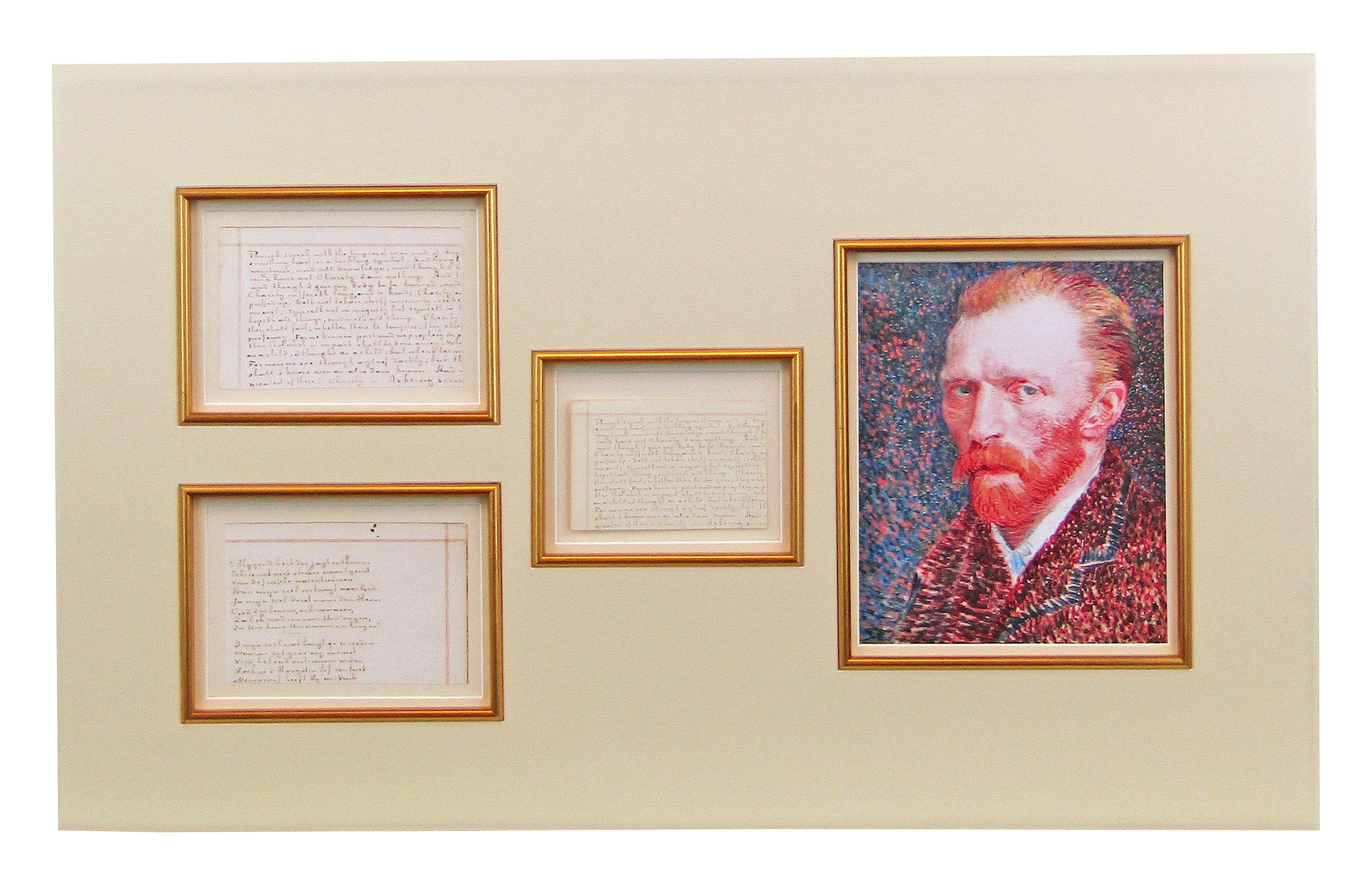 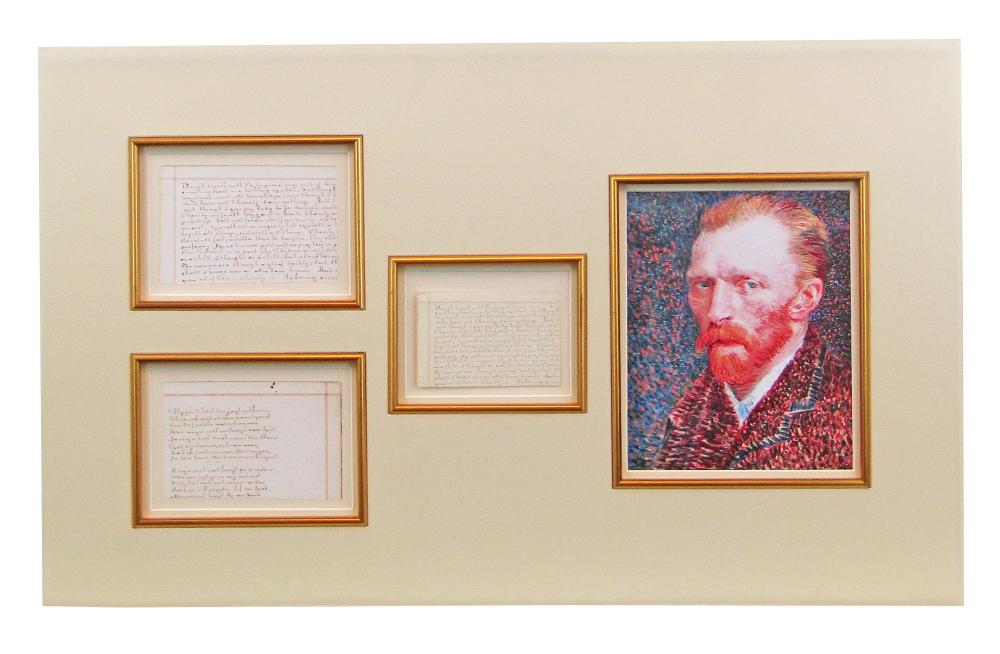 Biblical verses handwritten by Post-Impressionist artist Vincent Van Gogh (1853-1890) in both English and Dutch, comprising over 220 words, and among the rarest and most desirable manuscripts in the autograph world. What makes the present manuscript special is the spectacular display, combined with the fact that this item was owned by another famous artist, the great children's book author and illustrator Maurice Sendak (1928-2012).

The last full Vincent Van Gogh letter to sell at auction was at Sotheby's when it fetched $350,000 nearly a decade ago. A fragment of just over 20 words, arguably inferior in content, was sold by RR Auctions eight years ago for over $50,000. This was the last time an example appeared on the market before University Archives sold a Van Gogh manuscript similar to the present item in our September 29, 2021 auction for also close to $50,000! The present Van Gogh manuscript was previously in the collection of Maurice Sendak, of “Where the Wild Things Are” celebrity. Of course, Van Gogh's original artwork sells in the hundred million dollar range.

The paper fragment is inscribed with approximately 227 full and partial words in Van Gogh's hand. (150 words counted in the English portion, and 77 words found in the Dutch portion.) Van Gogh has copied out several verses from the Book of Corinthians in English recto, and several stanzas from the Book of Psalms in Dutch on the reverse side. N.d., but probably the mid-to late 1870s. N.p. but possibly England or the Netherlands. On cream red-ruled paper. Trimmed along the bottom and right edges. Three small ink spots found near the top of the Dutch side, and a small area of damage in the upper left corner of the English side. Light toning, else clear, bright, legible, and near fine. 3.875" x 2.5." The manuscript is handsomely displayed at the center of a cream mat decorated with gilt filet; high-quality photo reproductions of either side of the manuscript are displayed to the left; a high-quality photo reproduction of Vincent Van Gogh's "Self-Portrait" (1887) appears at right. The mat measures 24.875" x 15.5" x 1" overall. Accompanied by full transcripts and translations!

Vincent Van Gogh is best known for his moody self-portraits, vibrant floral still lifes, and dramatic Provençal landscapes. But he also served for a brief time as an evangelical Protestant missionary. During this early period of Van Gogh's life, before he himself fully committed to painting, Van Gogh especially admired artwork depicting religious subjects evoking Christian doctrine. Van Gogh's time in Ramsgate and Isleworth, England, first as a teacher and then as an assistant to a Methodist minister, Thomas Slade-Jones, granted him access to some of the paintings of the Anglo-American painter George Henry Boughton (1833-1905). In an August 26, 1876 letter addressed to his younger brother Theo, Vincent Van Gogh described one of Boughton's paintings entitled "The Pilgrim's Progress," which Vincent rhapsodized was "not a picture, but an inspiration." Vincent praised Boughton's work, seeing its religious message--resilience and trust in God in the face of adversity--ably conveyed through the painterly treatment. In this same letter, Vincent cited 2 Corinthians 6, 10: "As being sorrowful yet always rejoicing." This sentiment, "sorrowful yet always rejoicing" was so much on Vincent Van Gogh's mind that he wrote a sermon about it in November 1876. The biblical quote also appears on our paper fragment.

This remarkable manuscript testifies to the early period of Van Gogh's life when he sought refuge in religion. Author Cliff Edwards in his monograph, “Van Gogh and God: A Creative Spiritual Quest,” argues that Van Gogh’s early interest in religion was prompted by a desire to find answers to life’s deepest questions. (This interpretation conflicts with the usual reasons offered by historians, that Van Gogh had had a romantic disappointment, or had become morbidly obsessed with religion.) Viewed through Edwards’ lens, everything that Van Gogh did was oriented toward finding spiritual fulfillment. Van Gogh turned to painting after his attempts at preaching failed because it offered him solace in nature, a place where he felt closest to and at most peace with God. Van Gogh wrestled with religion and spirituality throughout his brief, tortured life. His existential restlessness spurred him on toward finding philosophical and spiritual enlightenment.

The biblical verses were necessarily truncated when it was trimmed, but the missing words can easily be supplied by consulting a King James Version of the Holy Bible. The entire English text handwritten by Van Gogh is as follows, with emdashes (--) indicating partial words created when the paper fragment was trimmed.

"Though I speak with the tongues of men and of Ang--
sounding brass, or a tinkling cymbal. And though
mysteries, and all knowledge, and though I
and have not Charity I am nothing. And t--
and though I give my body to be burned, and
Charity suffereth long, and is kind; Charity e--
puffed up. Doth not behave itself unseemly, seeke--
no evil; rejoiceth not in iniquity but rejoiceth in t--
hopeth all things, endureth all things. Charity
they shall fail; whether there be tongues, they shal--
pass away. For we know in part and we prophesy in p--
then that which is in part shall be done away. Whe--
as a child, I thought as a child: but when I becom--
For now we see through a glass darkly; but th--
shall I know even as I am known. And n--
greatest of these is Charity."

- Van Gogh's inscription of the King James Version of the Holy Bible, 2 Corinthians 6, 10:

By comparing Van Gogh's manuscript with the original verses in the King James Version of the Holy Bible, we see that the passages in COMPLETE form read:

"Though I speak with the tongues of men and of Angels, and have not Charity, I am become a sounding brass, or a tinkling cymbal. And though I have the gift of prophecy and understand all mysteries, and all knowledge, and though I have all faith so that I could remove mountains and have not Charity I am nothing. And though I bestow all my goods to feed the poor and though I give my body to be burned, and have not Charity, it profiteth me nothing. Charity suffereth long, and is kind; Charity envieth not; Charity vaunteth not itself; is not puffed up. Doth not behave itself unseemly, seeketh not her own, is not easily provoked, thinketh no evil; rejoiceth not in iniquity but rejoiceth in the truth, beareth all things, believeth all things hopeth all things, endureth all things. Charity never faileth: but whether there be prophecies they shall fail; whether there be tongues, they shall cease; whether there be knowledge, it shall pass away. For we know in part and we prophesy in part. But when that which is perfect is come, then that which is in part shall be done away. When I was a child, I spoke as a child, I understand as a child, I thought as a child: but when I become a man, I put away childish things. For now we see through a glass darkly; but then face to face: now I know in part but then shall I know even as I am known. And now abideth Faith, Hope, Charity but the greatest of these is Charity."

"– As being sorrowful yet always rejoicing."

On the reverse of the manuscript, Vincent Van Gogh copied several verses from the Book of Psalms in Dutch. These verses were taken from a special Dutch rhymed version of the Psalms called the "Psalmberijming," first published in 1773. A Commission for the Improvement of Rhyme Hymns had been formed in the Netherlands to standardize the biblical psalms and make them more intelligible; the result was the immensely well-liked and beloved "Psalmberijming." It was thought that presenting the Psalms in rhyming form had the most popular appeal.

Van Gogh's inscriptions in Dutch include Psalms 42:1-3 and Psalms 42:7-8. Van Gogh copied out religious texts for his own edification as well as for that of his loved ones. On October 3, 1876 from Isleworth, England, Vincent wrote to Theo: "Herewith I’m copying out a few psalms, you might like to read them at this time…." Might these psalms have been some of them earmarked for Theo?

These verses translated into English with an attempt to retain the ABAB rhyming pattern found in the Dutch original "Psalmberijming" read as follows:

"The deer evading man and hound
Thirsts for the water, fresh and clear
Its desire pales to the longing found
Within my soul, for God to be near
Lord, my soul is under Your sway
Oh, when, My Lord, will be the day
That I may stand before Your grace
To exalt Your name and see Your face?"

"Oh my soul, what hurts you so
What has caused you such unease
Find the trust from long ago
Exalt the Lord and find your peace
Many times He dried your tears."

These verses correspond to the following verses in the King James Version of the Holy Bible in English:

"As the deer pants for streams of water,
so my soul pants for you, my God.
My soul thirsts for God, for the living God.
When can I go and meet with God?
My tears have been my food / day and night,
while people say to me all day long,
'Where is your God?'"

"Deep calls to deep
in the roar of your waterfalls;
all your waves and breakers
have swept over me."

The religious subject matter of these biblical verses strongly suggests that the manuscript dates from the mid-to late 1870s, when Van Gogh began exploring Christianity in earnest. Van Gogh appears to have chosen and copied out the biblical verses with a definite objective in mind. The verses' emphasis on mercy, sacrifice, and divine love are core components of Evangelical Protestantism.

Van Gogh probably first considered the church because his father and paternal grandfather were ministers. As a young man in Dordecht, Van Gogh studied theology by translating Biblical passages into German, French, and English (of which our example, the manuscript inscribed with biblical verses in two languages, is reminiscent.) Van Gogh failed theology and missionary school entrance exams in the Netherlands and Belgium. After his stint in England, Van Gogh was able to secure a six-month-long post as a Protestant missionary in the community of Petit-Wasmes in southern Belgium in late 1878. Yet Van Gogh's zealous undertaking of his evangelical duties alienated local church leaders, and he returned to the Netherlands, depressed and downtrodden, after only 14 months. Van Gogh's younger brother Theo suggested he abandon the church and take up art; the rest is history.