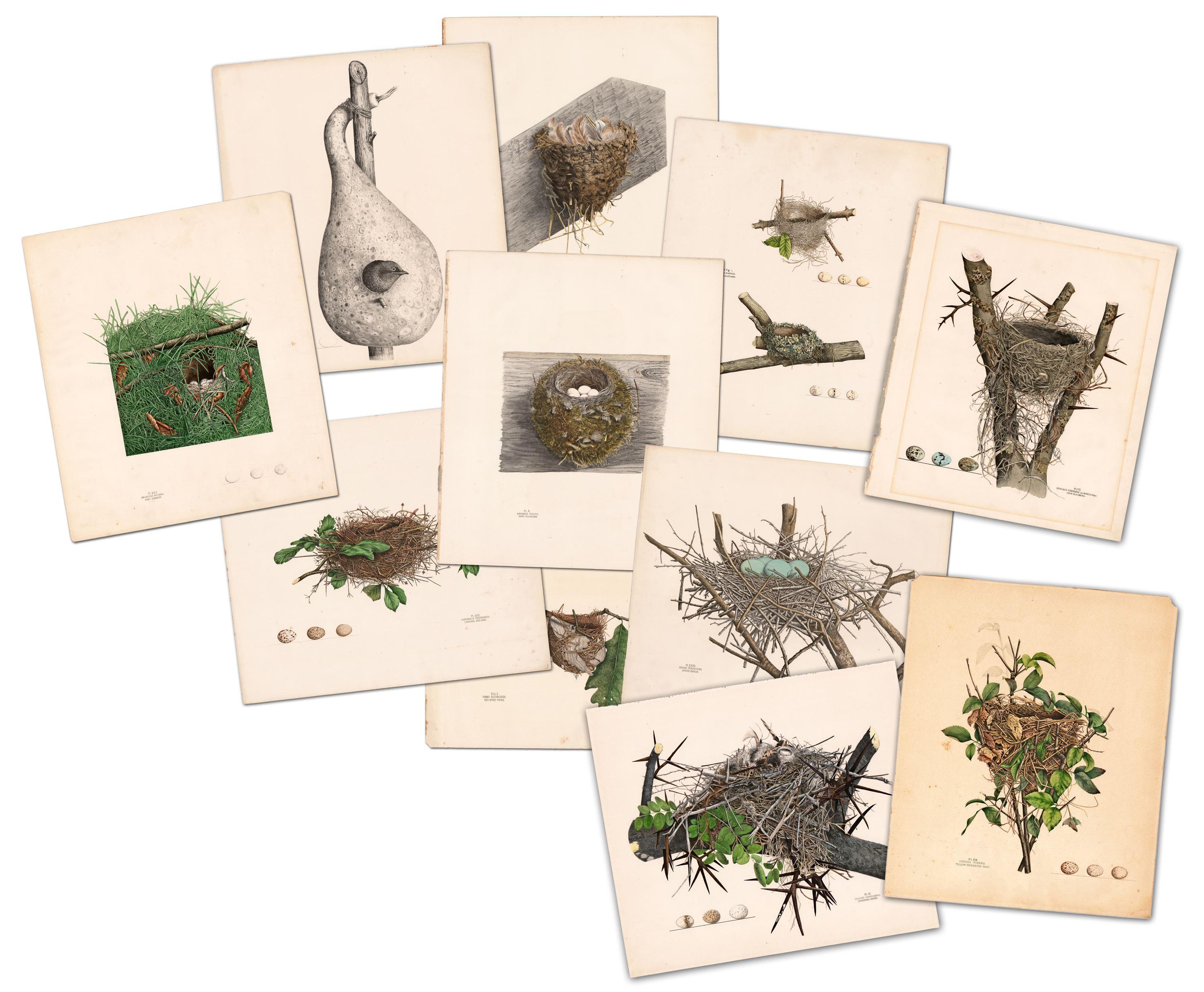 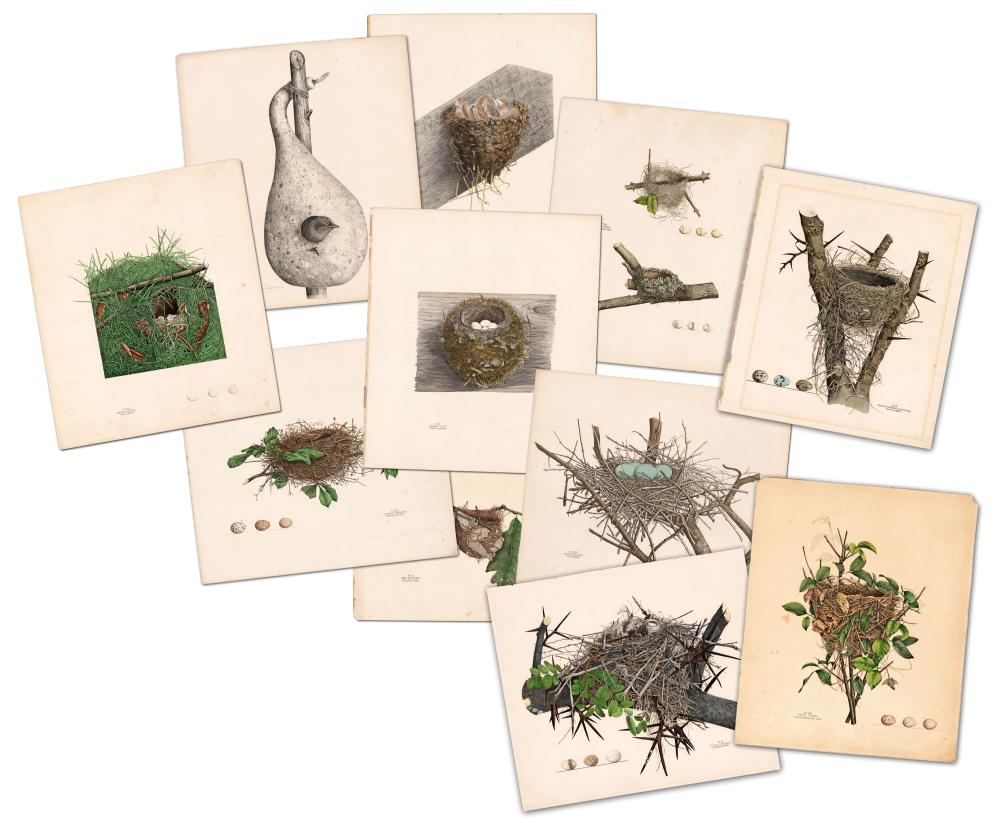 A small group of eleven lithographs featuring twelve illustrations, ten of which are hand-colored, from Howard E. Jones (1853-1945), "Illustrations of the Nests and Eggs of Birds of Ohio" (Circleville, Ohio: Robert Clark & Co. of Cincinnati, text; Adolf Krebs Lithographic Co. of Cincinnati, plates; ca. 1879-1886). The plates originally appeared in bound limited edition copies of the aforementioned volume which were sent to subscribers. There are fewer than 50 copies of the work known to exist today. In addition to being so rare, these lithographs are highly desirable because of the scientific accuracy and pictorial beauty of the illustrations.

The group consists of eleven lithographs, one plate which features two figures, for a total of twelve illustrations. Ten lithographs are hand-painted, while one lithograph, Pl. XXVIII, remains uncolored. The lithographs were printed on luxurious J. Whatman Turkey Mill thick cream paper; several plates show partial watermarks. One lithograph, Pl. XX, is mounted on thin chipboard. Expected wear includes toning, and scattered minor foxing or damp-staining. Isolated edge darkening and traces of adhesive or binding found along some edges. Minor closed tears and wrinkles along edges, with haloing around some images, and ghost impressions of other prints found on some backs. Else near fine. Please see photos for additional notes on condition. The smallest plate, Fig. 2, is trimmed to an overall size of 15.25" x 9.325." The others measure approximately 17.25" x 15" with full margins, as issued.

The plates depict various bird's eggs and nests belonging to some of the 130 birds native to Ohio. Natural specimens have been drawn, printed, and hand-painted to scale, with the illustrations carefully reflecting exact color, shape, and material. The extremely detailed depictions show bird's nests fashioned out of sticks, feathers, grass, bark, moss, and even a hollowed-out gourd.

The lot consists of eleven lithographs and twelve illustrations:

"Illustrations of the Nests and Eggs of Birds of Ohio" was a joint literary and artistic effort spearheaded by the family of Nelson E. Jones (1821-1901) of Circleville, Ohio. The entire Jones family was interested in ornithology, especially daughter Genevieve E. Jones (1847-1879), whose name is most associated with this work. Genevieve saw the need for a book about birds' nests and eggs to serve as a companion volume to John James Audubon's seminal work, "Birds of North America." She and a friend, Eliza J. Schulze, drew samples which Genevieve's brother Howard E. Jones had collected; Howard also provided the text. After Genevieve's untimely death from typhoid fever at age 32, her mother Virginia E. Jones (1826-1906) took over the drawing and printmaking. Nelson provided funding for the printmaking and book binding. Local artists Nellie D. Jacob, Josephine Klippart, and Kate Gephart served as colorists.

The original 2-volume "Illustrations of the Nests and Eggs of Birds of Ohio" contained 68 beautiful plates, and attracted 39 subscribers. A few subscribers included Elliott Coues, the well-known ornithologist; Ohio native and 19th U.S. President Rutherford B. Hayes; then Harvard College student and future 26th U.S. President Theodore Roosevelt; and the Smithsonian Institution Libraries, which has two complete sets. The Jones family's work received universal praise after the publication of the first volume in 1879. Coues reported in the 1882 "Bulletin of the Nuttall Ornithology Club" that: "There has been nothing since Audubon in the way of pictorial illustrations of American ornithology to compare with the present work - nothing to claim the union of equal degree of artistic skill and scientific accuracy."

"Illustrations of the Nests and Eggs of Birds of Ohio" is a superb example of female-produced art of the Victorian era. Art was one of the few arenas which women could participate in without censure, and it was even a mark of cultivation and gentility. In both its subject matter--the natural world--and in the obsessive meticulousness of its details, the Jones family's ornithological lithographs resemble other female handicrafts of the period; one thinks of the elaborately layered sand art, ornate shell art, or ornamental algae scrapbooks of the Victorian era. The Jones family art studio could also be considered a cottage industry, well within the bounds of the domestic sphere.