Back to catalog
Lot 44 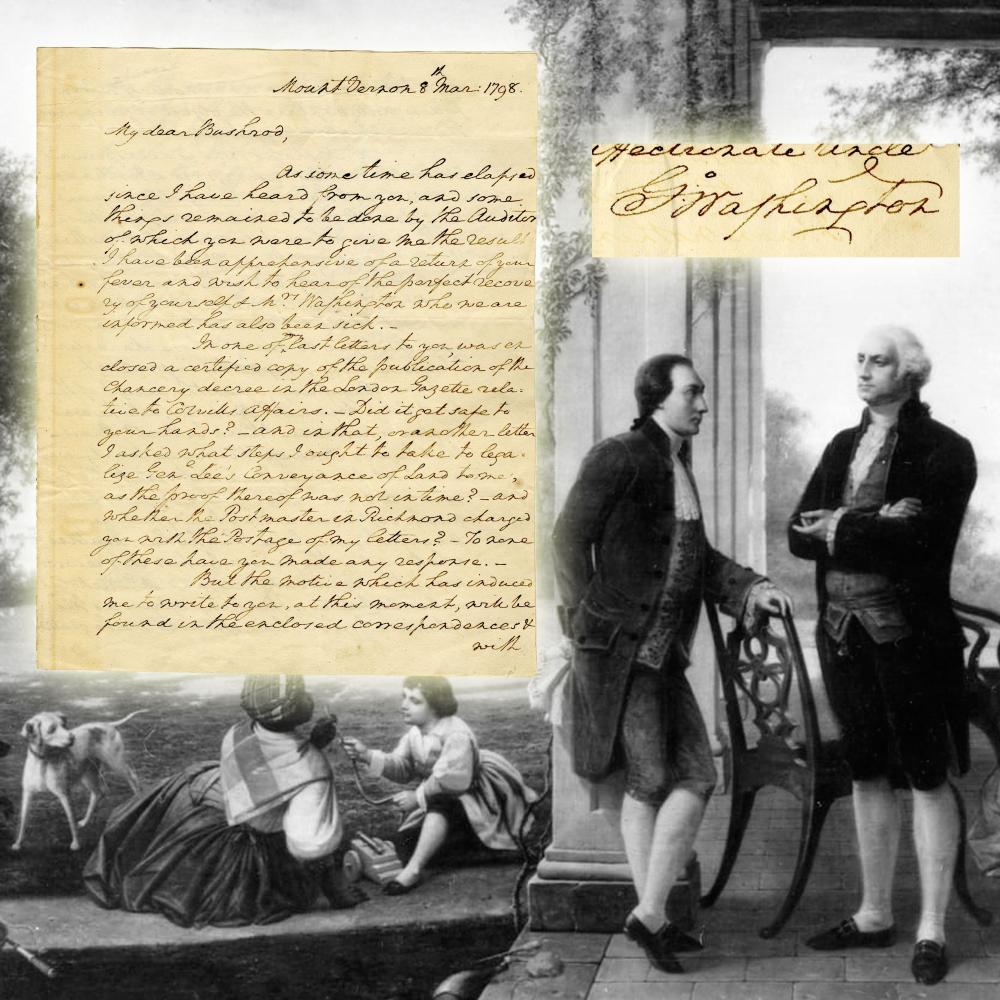 Washington, George Autograph letter signed ("Go: Washington") to his nephew Bushrod Washington. Additionally, there are 3 other signatures “Washington” in the body of the letter. With over 450 words in Washington’s hand!

3pp on a bifolium of wove paper, measuring 7.75" x 9.75", Mount Vernon, dated March 8, 1798. Watermarked 1794, with a reception docket on verso of the second leaf and a later endorsement reading "Transmitted by Judge Washington through Geo Harrison Esq: of Philadelphia to F. B. Bailey." This fine letter dealing with business and political intrigue begins with Washington couching his irritation with his nephew's inattention in solicitous terms: "As some time has elapsed since I have heard from you, and some things remained to be done by the Auditor of which you were to give me the result I have been apprehensive of a return of your fever and wish to hear of the perfect recovery of yourself & Mrs Washington who we are informed has also been sick."

The former president then turns his attention to finalizing his purchase of some Kentucky lands from Henry Lee. "In one of my last letters to you, was enclosed a certified copy of the publication of the Chancery decree in the London Gazette relative to Colvills Affairs. Did it get safe to your hands? and in that, or another letter I asked what steps I ought to take to legalize Genl Lee’s Conveyance of Land to me, as the proof thereof was not in time? and whether the Postmaster in Richmond charged you with the Postage of my letters? To none of these have you made any response."

Washington next explains the real reason for his letter: his wish to extricate himself from a potentially annoying—if not embarrassing—correspondence with a political gadfly named John Nicholas, who had written Washington to warn him that "some of your greatest and bitterest enemies … had even carried them to the unjustifiable and scandalous lengths of violating the Seals of private correspondences, in hopes of finding out State secrets favourable to their schemes."

Washington provided Bushrod with some background and instructions on how to deal with Nicholas: "But the motive which has induced me to write you, at this moment, will be found in the enclosed correspondences & with the observation and enquiry which follow, will explain the object of giving you the trouble of reading them. Mr Nicholas (who is a conspicuous performer in this business) is a Gentleman with whom I have no recollected acquaintance, and the political conduct of all those of the name, whom I do know, adds nothing to my esteem of them. He seems very desirous of drawing me into a correspondence on Party subjects; which—of all others—is not the most pleasant: and even civil answers upon this topic to one of whose character I know nothing, might be imprudent. Enquiring, upon the receipt of the first letter from Mr Nicholas, who he was, it was answered—I think by Doctr Stuart—that he was Clerk of Albemarle Court; was a respectable man; well disposed to the Government; and the reputed author of a number of pieces under the signature of Americanus. Since that, he has doubted whether it is the person he had in view, or not; this circumstance, and Mr Nicholas in his last letter speaking of you as his intimate friend, has induced me to give you the reading of all the letters; and to rest it with you, from a view of the subject, and the knowledge you possess of the character of Mr Nicholas, to forward, or return to me, the letter herewith enclosed, to its address. It is left open for your perusal—If it goes on, seal & put it under another cover, or not, as you please. The other enclosures will be returned to me of course."

Bushrod forwarded his uncle's letter to Nicholas on March 13, and it evidently achieved its intended result of drawing the intrigue to an end, since no other correspondence between Nicholas and Washington is recorded. The letter has some light marginal discoloration throughout. There is a tiny portion lost from the lower fore-edge corner of the first leaf. Boldly signed, overall very fine.