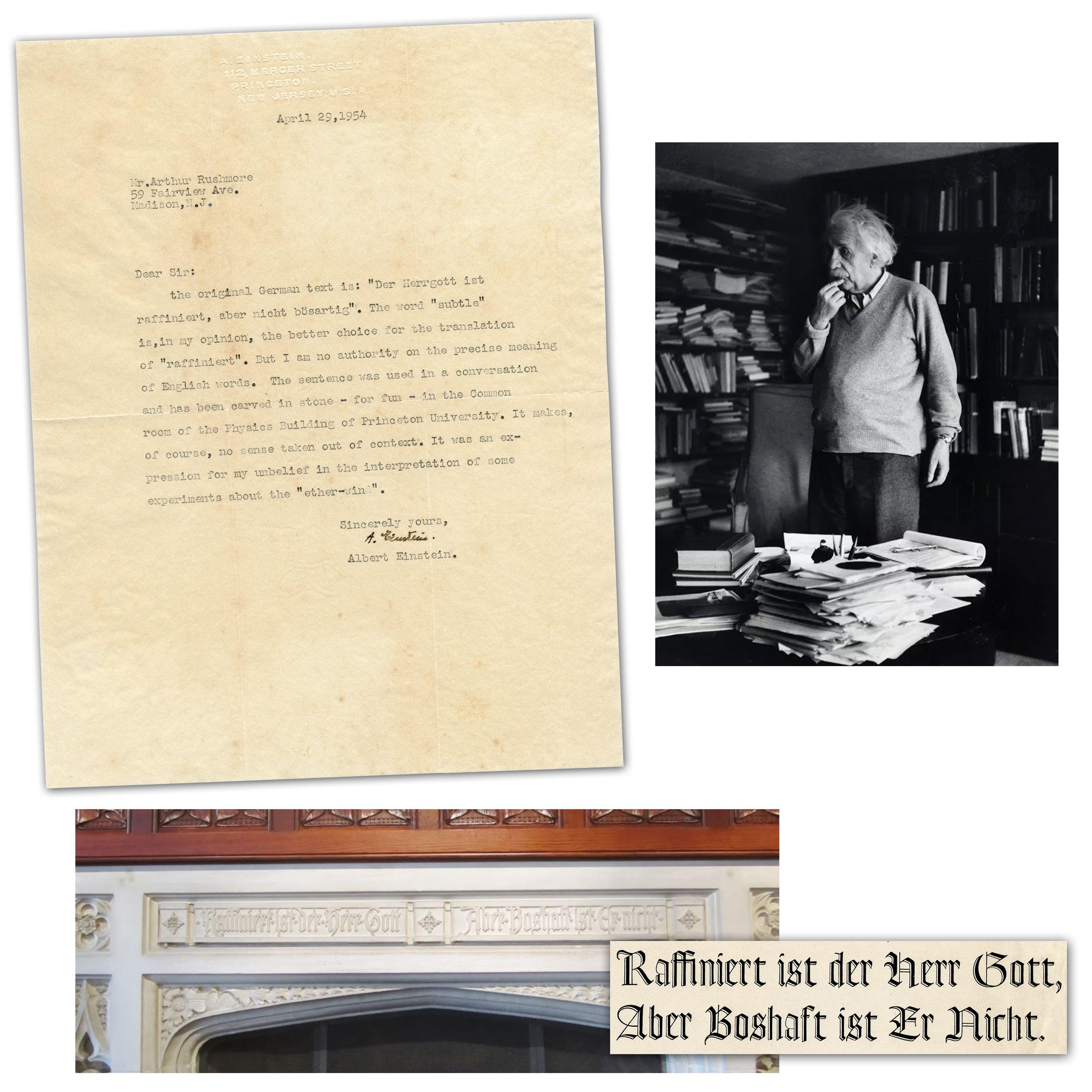 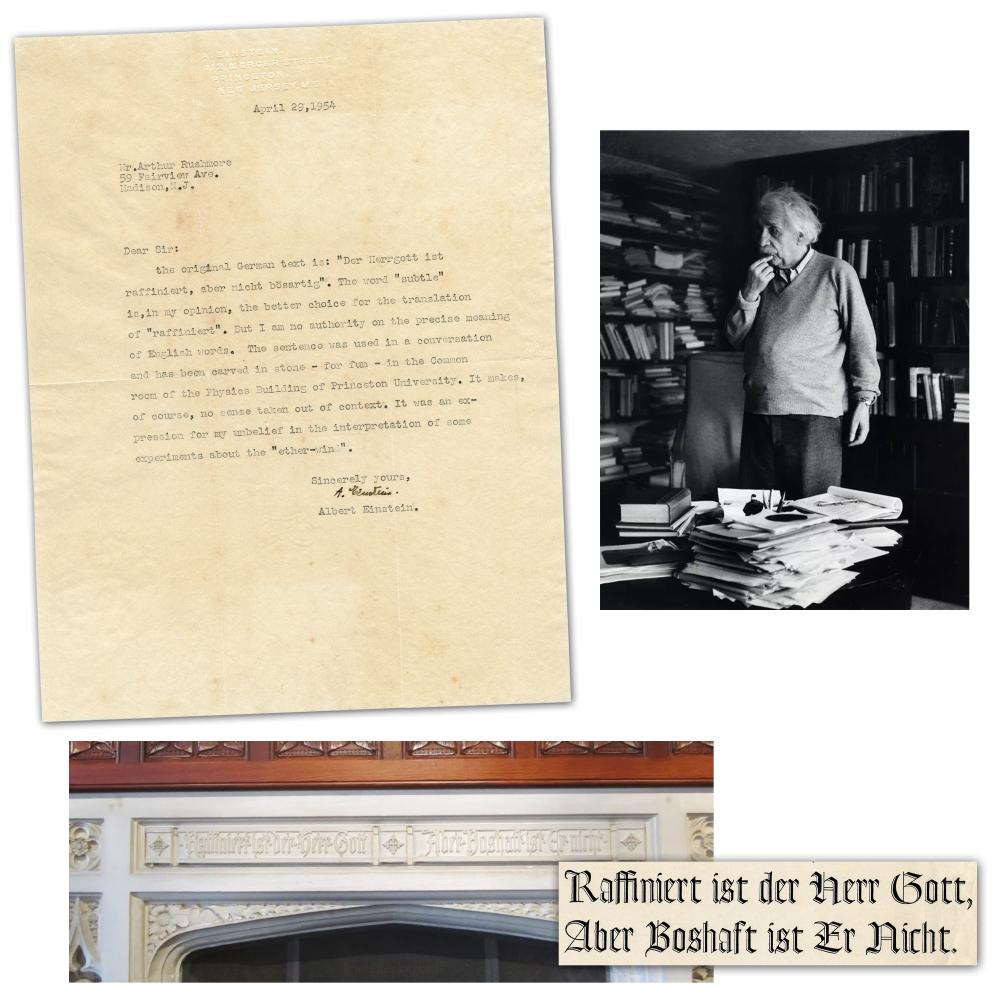 A highly important letter illuminating the context and meaning of Einstein’s famous aphorism “Subtle is the Lord, but not malicious” – a statement that has come to be taken as Einstein’s Scientific Motto.

Einstein here indicates that this famous statement was made in the course of a conversation he had at Princeton, and that the statement was meant as “an expression for my unbelief in the interpretation of some experiments about the ‘ether-wind’.” The statement was originally made in German – Einstein here recording it as “Der Herrgott ist raffiniert, aber nich bosartig” -- and it quickly became famous (both among physicists and the educated lay community).

Letters discussing this famous aphorism/motto are extremely rare, and we think the present is the most extensively known letter on the topic. Disagreement existed, however, about the precise translation of the statement, the meaning and English equivalent of the word “Raffiniert” proving especially elusive. Various different translations for the term had been posited -- “sophisticated” and “crafty,” for two examples -- but Einstein here decisively states that “The word ‘subtle’ is, in my opinion, the better choice for the translation” – a translation now deemed authoritative.

The “experiments about the ‘ether-wind’” which Einstein here references were conducted by Dayton Miller, a physicist who claimed to have found empirical evidence invalidating Einstein’s Theory of Relativity. Beginning in 1900, Miller began experiments to detect the existence of an “ether drift” using the same apparatus as the earlier Michelson-Morley experiment. Though Miller’s initial results published in 1904 showed no evidence of such a drift, Miller continued to refine his experimental techniques – developing the most sensitive interferometer in the world and taking millions of measurements – eventually claiming that he had uncovered a small amount of “ether drift” (of about 9 km/s). If Miller’s findings were in fact true, they would have empirically disproved the validity of the theory of special relativity; but in Einstein’s view, Miller’s seemingly positive results were most likely a consequence of unaccounted differences in pressure and temperature due to altitude.

This letter is of considerable importance for our understanding of Einstein’s view of God and his Philosophy of Science. Einstein here affirms that God makes the laws of nature and that these laws are both difficult to discern and well-crafted (i.e. “subtle”); and because the Deity is not “malicious” (German: bosartig, “evil-doing”) – i.e. because the Diety is “good” -- these physical laws are fixed and together form an integrated logical whole: such that once these laws have been established with scientific rigor (both theoretically and empirically), they are not readily undone by half-baked thinking or sloppy experiment. Einstein’s view of God here is consistent with his “Cosmic Religion”, which recognizes God to be the immutable binding force of Nature and not a transcendent or personal Deity. Einstein himself explained the meaning of his aphorism (in 1930) by paraphrastically explaining that "Nature hides its secret because of its essential loftiness, but not by means of ruse.”

The present letter affirms Einstein’s complete confidence in the validity of the theory of relativity, and the aphorism itself is of a piece with the remark Einstein made in 1919 when asked what he would have thought if the eclipse experiment proving General Relativity had failed: Einstein, at that time reportedly saying, "I would have been sorry for the dear Lord. The theory is correct." In reviewing Miller’s ether-drift experiments, error analysts argue that Miller, in fact, overestimated the precision of his results and that his measurements were actually consistent with a fringe difference of zero. Einstein’s statement, however, has relevance beyond the immediate circumstances of Miller’s experiments and can also be applied to Einstein’s view of quantum physics, which Einstein deemed an inadequate and incomplete view of nature – the present aphorism perfectly complementing Einstein’s statement that “God does not play dice with the universe.”

This letter is of historical relevance for Einstein’s affirmation that the statement was indeed made at Princeton; and the cited conversation in fact took place in 1921, while Einstein was lecturing at Princeton on the Theory of Relativity (a series of lectures that would subsequently be published as Einstein’s most famous book, “The Meaning of Relativity”). Einstein's motto was even carved in the fireplace mantel at Jones Hall (formerly Fine Hall) at Princeton University, where Einstein worked, though it is important to note that Einstein’s statement in this letter varies somewhat from the inscription actually carved on the mantle of the Princeton fireplace: “raffiniert is der Herr Gott, Aber Boshaft is Er Nicht”. The importance of the present aphorism for Einstein’s life can be understood by the fact that the authoritative scientific biography of Einstein (by Abraham Pais) is entitled “Subtle is the Lord.”