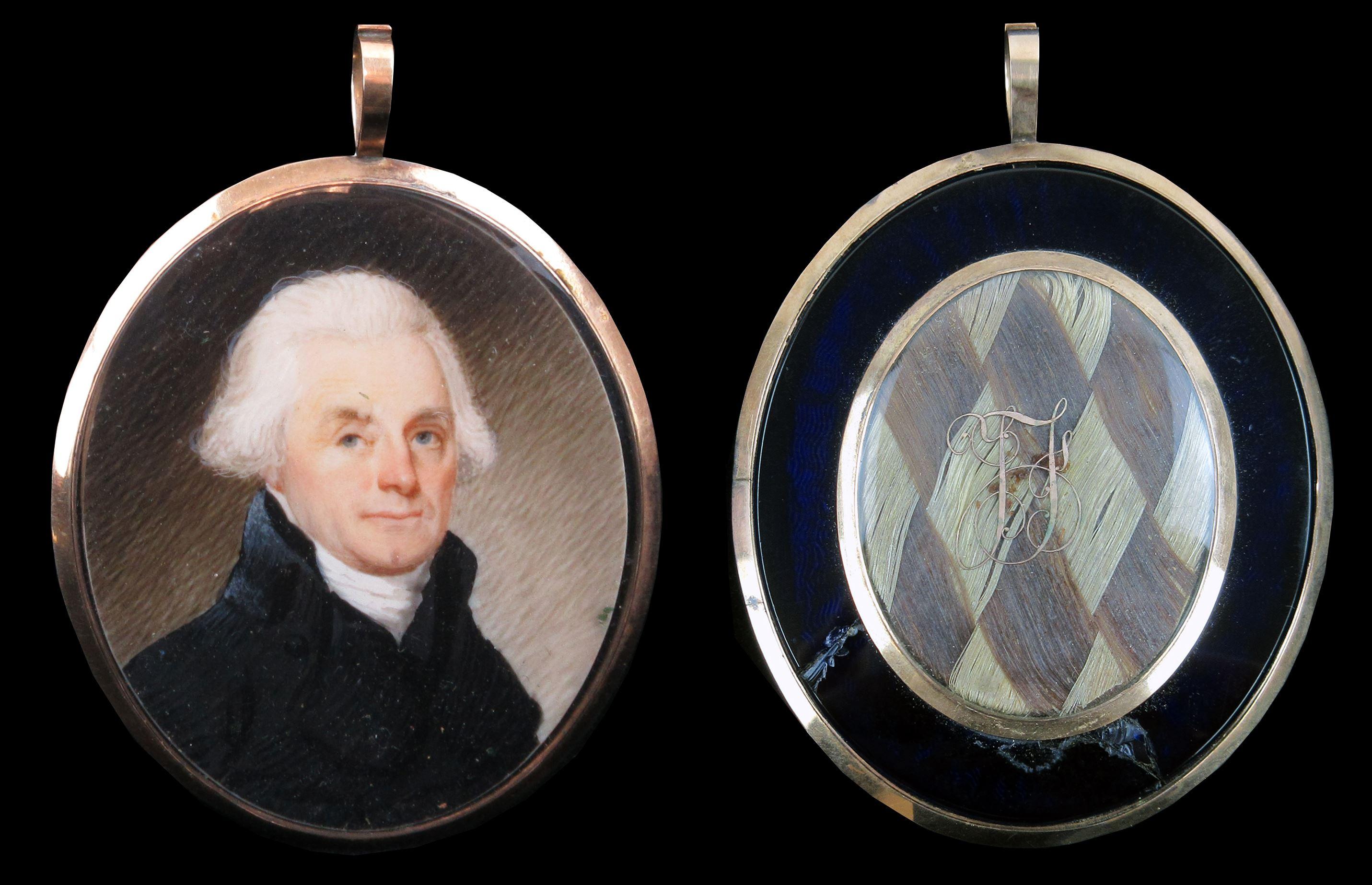 Among the Most Important Jefferson Relics Extant! Portrait Miniature Attributed to Robert Field, with Jefferson's Hair, Perhaps 1,000 Strands or More 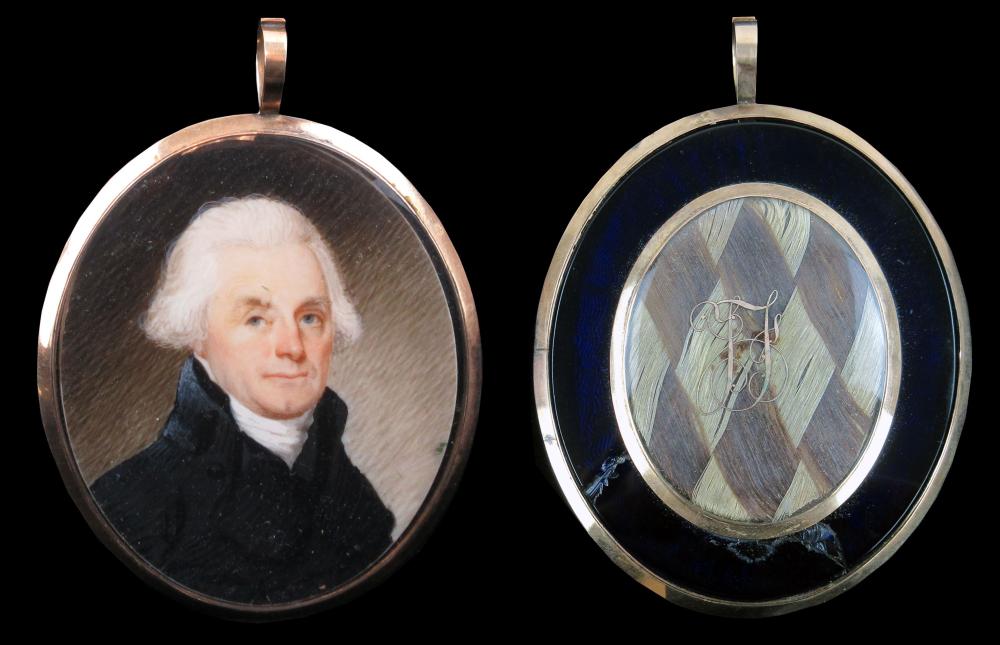 Among the Most Important Jefferson Relics Extant! Portrait Miniature Attributed to Robert Field, with Jefferson's Hair, Perhaps 1,000 Strands or More

A superb example of a portrait miniature and hairwork jewelry locket, ca. 1790-1810, consisting of a finely executed portrait miniature of 3rd U.S. President Thomas Jefferson (1743-1826) attributed to Robert Field recto, and two braided locks of hair verso, one set belonging to Jefferson. The locket was either personally owned by Jefferson or perhaps presented by him to a family member or friend. John Reznikoff, owner of University Archives, is a world-renowned expert in historical hair, and a 2014 Guinness Book of World record holder for the largest hair collection in the world. To our knowledge, no Jefferson hair relics have recently appeared on the market except for a small lock now in Reznikoff's collection acquired from Dr. Miller's collection of hair locks belonging to Declaration of Independence Signers.

The locket is Neo-Classical in design, with a thin gilt brass bezel fitted with a single loop at top for attachment to a necklace or watch chain. The portrait is watercolor on an unidentified oval-shaped mount, probably of ivory, bone, or a comparable organic material. The bust portrait shows Jefferson with powdered hair, wearing a white cravat and tall-collared black jacket. The back of the pendant casework has a cobalt blue wavy glass border and an oval-shaped window revealing an impressive hairwork display incorporating as many as 1,000 strands at center. This of course is only an estimate based on previous experience with hair relics. There may be many more and there may be less. The two hair types, one whitish-blond and the other auburn, are interwoven in an alternating chevron pattern (interestingly, the coat of arms associated with Jefferson's family features a similar diamond pattern.) A "TJ" cipher in gold foil overlaying the convex glass window verso resembles Jefferson's personal seal, the latter which also featured the motto "Rebellion to tyrants is obedience to God."

The portrait miniature gives a first impression of exquisite delicacy. There is a minute paint smudge affecting Jefferson's right eyebrow and forehead mentioned just for accuracy. The convex glass recto has a small dark imperfection (possibly a loosened paint fleck) which does not deflect at all from the impressive appearance. There is minor tarnish to the cipher and casework, and two minor chips to the glass border. The miniature is housed in a customized oval-shaped silk-lined leather case, with an opening at the top allowing the locket casework loop to extend past the case. The case shows expected wear such as minor scuffs and surface loss; it is slightly warped so that it does not completely close. Else near fine. Not examined out of its casework. The locket measures 3.25" tall including the loop (2.75" long excluding the loop), 2.375" wide at its widest part, and approximately .25" deep. The leather case measures 3.375" x 2.75."

The portrait miniature of Jefferson is attributed to Robert Field (1769-1819) for reasons which will be outlined below. However, we are not art dealers and this is only an attribution. Indeed, the portrait miniature could have been painted by someone more famous, or in fact less.

Robert Field was one of the premier miniaturists in the United States in the Early Republican period. A London-born artist who trained at the Royal Academy in 1790, Field emigrated to the United States four years later to exploit the burgeoning art market, and he stayed in the U.S. until 1808. During that 14-year-long period, Field was an itinerant artist, seeking out commissions from wealthy individuals in major cities like Boston, Philadelphia, Baltimore, and Washington, D.C. Field's patrons included the most affluent, and socially and politically influential people of the day, and his subjects included George and Martha Washington as well as Thomas Jefferson. In 1812, Field moved to Nova Scotia; he died in Jamaica in 1819.

Field painted a small watercolor of Thomas Jefferson, likely from life, around 1797, and in 1807, he created an engraving of Jefferson after Gilbert Stuart's famous portrait. No documentation exists that shows Field painted a portrait miniature of Jefferson, but according to Field scholar Harry Piers, there does exist a miniature in oil inscribed in another hand as "Jefferson. After Stuart by Robt. Field. Also engraved by R.F. Died in 1819."

Strong stylistic evidence also supports the attribution to Field, including the short and textured brush strokes found here. A valuable comparison can be made by contrasting our attributed Field portrait miniature of Thomas Jefferson with a Field signed portrait miniature of George Washington found in the collection of the Yale University Art Gallery (2008.134.1). The painterly treatment of the subject is similar to ours, as is the casework and the presentation of the plaited hair and cypher at back. See attached photos included for reference purposes only.

Field usually signed his miniatures with "RF" or "F" initials, neither of which is present here. The absence of the artist's signature, however, could suggest more about the intended recipient of the portrait miniature than the provenance. It is possible that this was an unofficially commissioned piece presented to a secret recipient commemorating a relationship not societally sanctioned (such as Jefferson's with Sally Hemings; more on this below.) The need for discretion--even when commissioning artwork--would have been even more important during the high-profile period corresponding to Jefferson's presidency, ca. 1801-1809, when this portrait miniature might have been painted.

While portrait miniatures appeared in Europe as early as the sixteenth century, the tradition of featuring hairwork on miniature pendant backs developed in the eighteenth century. Combination portrait miniatures and hair relics were bestowed to loved ones and friends as tokens of affection, or they marked important events such as engagement or marriage. They also figured prominently in mourning customs, where they held a potent double appeal: miniature portraits were one of the only ways of capturing someone's likeness prior to photography; and hair was a unique tangible link to the deceased that did not decay. Portrait miniature and hairwork jewelry appears in the form of brooches, necklace pendants, lockets, bracelets, watch chains, watch fobs, rings, earrings, cuff links, and stickpins.

We can speculate then, that Jefferson's portrait miniature with hair relic was presented to a loved one, probably either the person whose hair was intertwined with his, or perhaps to the children or grandchildren of that person if deceased. Hairwork jewelry drew on established symbolic tropes to convey meaning, so a braided design like ours would almost certainly suggest love, union, fidelity, etc.

The young Thomas Jefferson was one of the most famous redheads in American history, yet he wore wigs during his early political career and powdered his hair for most of his adult life until it grayed naturally.  In a Thomas Sully portrait of Jefferson painted in 1821, there were streaks of red visible in the former president's hair. Two years before Jefferson's death, in 1824, Daniel Webster wrote that Jefferson's hair was still thick and abundant, "which having been once red, and now turning gray, is of an indistinct sandy color."

If Jefferson's hair is the lighter in color, to whom did the auburn locks belong? Some candidates might include:

Jefferson married beloved first wife Martha in 1772 and the couple had six children. There is no extant image of Martha, who died a few months after childbirth at age 33, but contemporaries reported that she had auburn hair.

Accounts of Patsy as an adolescent stated that she had red hair and freckles. Her hair looks deep auburn or brown in a later portrait by Thomas Sully, the same color as hair in a mourning locket associated with her found in the collection at Monticello.

Mary also died young, so no image survives of her. It is said that she bore a general resemblance to her mother, who had reddish hair.

Patsy Jefferson Randolph and husband Thomas Mann Randolph, Jr. (1768-1828) had eleven children to survive to adulthood including nine of whom were born prior to 1810, by which point our piece was probably completed: Anne, Thomas, Eleanor, Cornelia, Virginia, Mary, James, Benjamin, and Meriwether. It is possible that the auburn hair belonged to one of the oldest grandchildren. Three of these grandchildren were later depicted in portraits showing brown, auburn, or dark brown hair. Jefferson's great granddaughter Martha Jefferson Trist Burke (1826-1915) recalled that Jefferson often had his hair combed by his granddaughters. How fitting then, that he might commemorate this happy past-time with the presentation of a locket to one of his darling hairdressers.

Polly Jefferson Eppes had one surviving son fathered by husband John Wayles Eppes (1773-1823), Francis W. Eppes (1801-1881.) Francis's birth date is well within the period of the approximate creation of this portrait miniature and hair locket.

The hair could also possibly belong to Jefferson's de facto second wife, Sally Hemings. Hemings, who was most likely the half-sister of Jefferson's first wife Martha, was an enslaved person attached to Jefferson's estate at Monticello. The pair had a long-term sexual relationship which likely resulted in six children. Sally was 3/4 white. Her beauty was universally acknowledged by contemporaries, but there is a frustrating lack of description of her physical appearance besides her having long, straight hair of an unknown color.

This outstanding piece is certainly a presidential--and Jeffersonian--collector's dream, combining a period miniature portrait of Jefferson with a massive amount of his hair. Not to mention the tantalizing mystery surrounding the identity of the second person whose hair is paired with Jefferson's. Deserving of hours of more research, and maybe even scientific testing!

Over the last 20 years, portrait miniatures of similar or same artist, subject, construction, and quality have sold between several hundreds of thousands of dollars and over $1 million. These include: the Robert Field signed George Washington portrait miniature including hair now at the Yale University Art Gallery previously mentioned above, selling for over $300,000 in 2009; and a John Ramage painted George Washington portrait miniature including hair crossing the auction block at Christie's for $1,216,000 in January 2001.