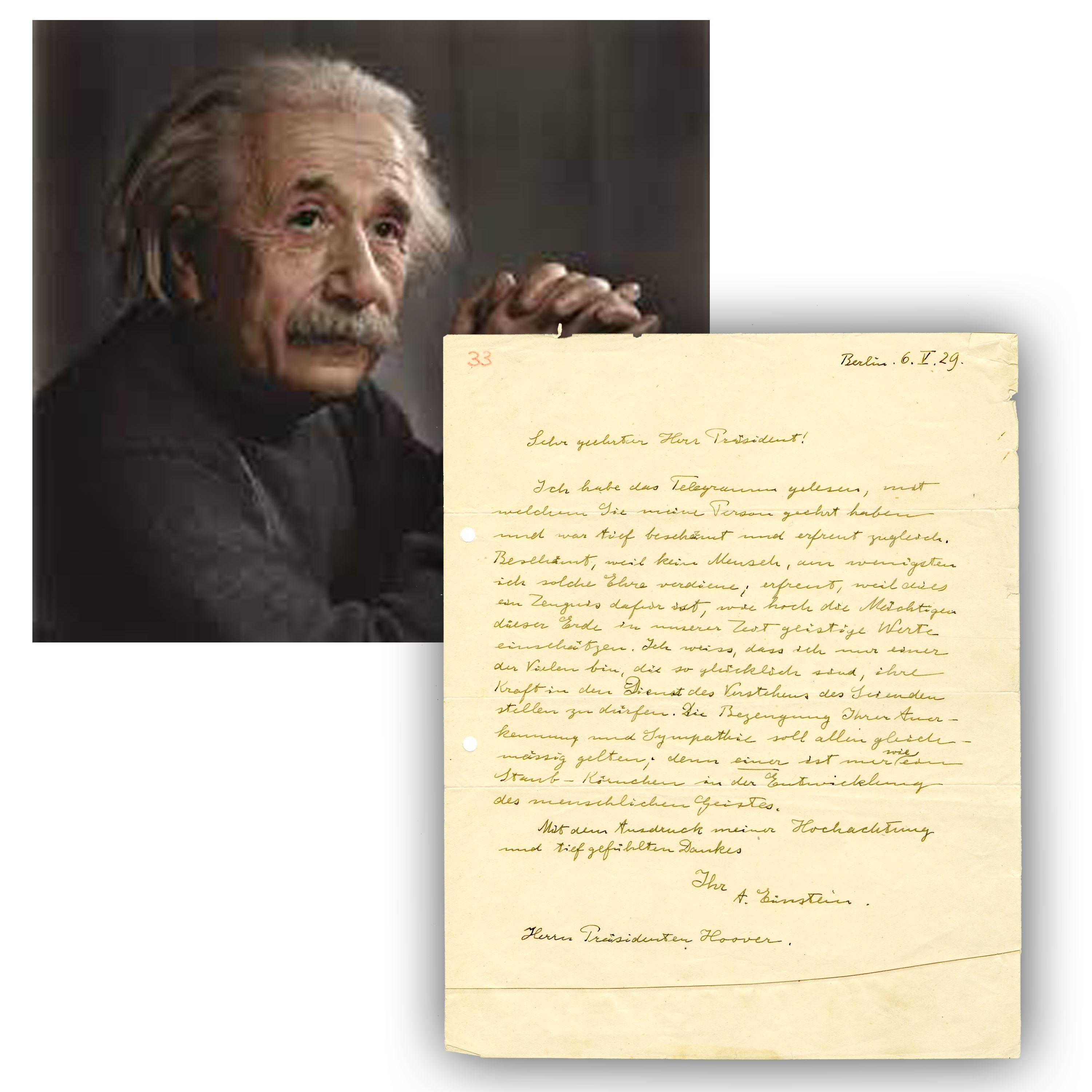 World-Class Einstein ALS to U. S. President --1 of 2 Known -- Stating Humbly in Part: “I am but a grain-of-dust in the development of the human spirit” 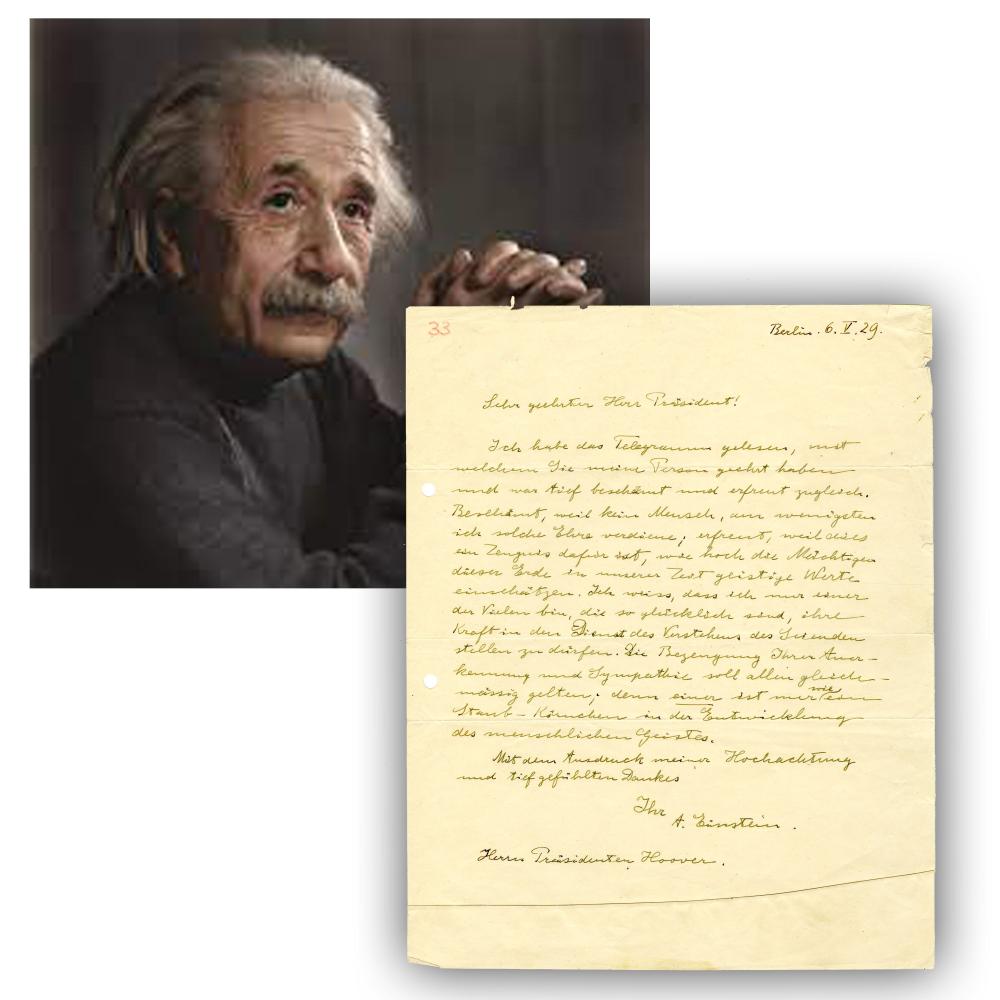 World-Class Einstein ALS to U. S. President --1 of 2 Known -- Stating Humbly in Part: “I am but a grain-of-dust in the development of the human spirit”

Albert Einstein ALS: “I am but a grain-of-dust in the development of the human spirit”

1p, measuring 8.625" x 10.875", Berlin, dated May 6, 1929. An autograph letter signed "A. Einstein", addressed to President Herbert Hoover. Written in German, the letter is a remarkable self-assessment following his 50th birthday. Letters by Einstein to the President of the United States are absolute rarities. We can only point to one other – the famous 1939 letter Einstein sent Roosevelt about the Atom Bomb. A humbled Einstein writes to thank Hoover for his telegraph, regarding the "Einstein Jubilee Celebration". A translation reading in full:

I have read the telegram with which you have honored me, and I was both profoundly humbled and elated. Humbled, because no person, I least of all, is worthy of such an honor; elated, because this is proof of how highly the powers-that-be of this earth esteem intellectual values in our time. I know that I am just one of the many who are so happy to use their energy in the service of the understanding of the Sciences. Your testimony of recognition and congeniality shall refer to all of us equally; because I alone am but a grain-of-dust in the development of the human spirit.

With the expression of my respect and deeply felt thanks

The letter has flattened mail folds, with additional creasing in places. Some chipping and small tears or separations at the edges. Boldly signed by Einstein.

Einstein’s 50th birthday was marked worldwide. Einstein was at that time the most famous man in the world and his work with Unified Field Theory was front page news. In America, an “Einstein Jubilee Celebration” was held at the Metropolitan Opera House, a charitable event at which many personages of high diplomatic rank and social standing made many expressions of tribute and homage. Though Hoover himself was not in attendance, he sent a congratulatory telegraph endorsing the celebration. The jubilee committee had been headed by Herman Bernstein, who was kind enough to forward the president's comments onto his fellow scientist. Hoover's telegraph read in full:

I cordially approve the plan to pay tribute to Professor Albert Einstein on the occasion of the 50th anniversary of his birthday. Professor Einstein ranks high among the foremost scientists of all time, who have enriched mankind by their invaluable contributions to thought and human progress. Every important scientific achievement is a step forward in the direction of better universal understanding and good will. It is very fitting that distinguished educators and other public spirited Americans are paying this tribute to Professor Einstein.

Three thousand five hundred guests attended the Einstein Jubilee Celebration held at the Metropolitan Opera House. Although Einstein had declined every request for permission to hold a 50th-birthday celebration in his honor in Berlin, he granted his permission to this event. The event was arranged under the supervision of the Einstein Jubilee Committee in conjunction with the Jewish National Fund. Einstein’s unparalleled contribution to science, his character, and his devotion to the Palestine movement were all praised during the addresses delivered. Secretary of the Interior, Ray Lyman Wilbur, who represented President Hoover, compared Einstein to Charles Lindbergh, calling him a pioneer “who goes alone”; and the German Ambassador to the United States, Count F. W. von Prittwitz, called Einstein "an ambassador of goodwill spanning the universe".

Time magazine deemed Einstein the “Man of the [20th] Century,” both for his science and for his humanity. The present letter superbly exhibits both the egoless humility of “the world’s greatest scientist” and his consummate generosity of spirit. A unique and inspiring letter of museum quality.