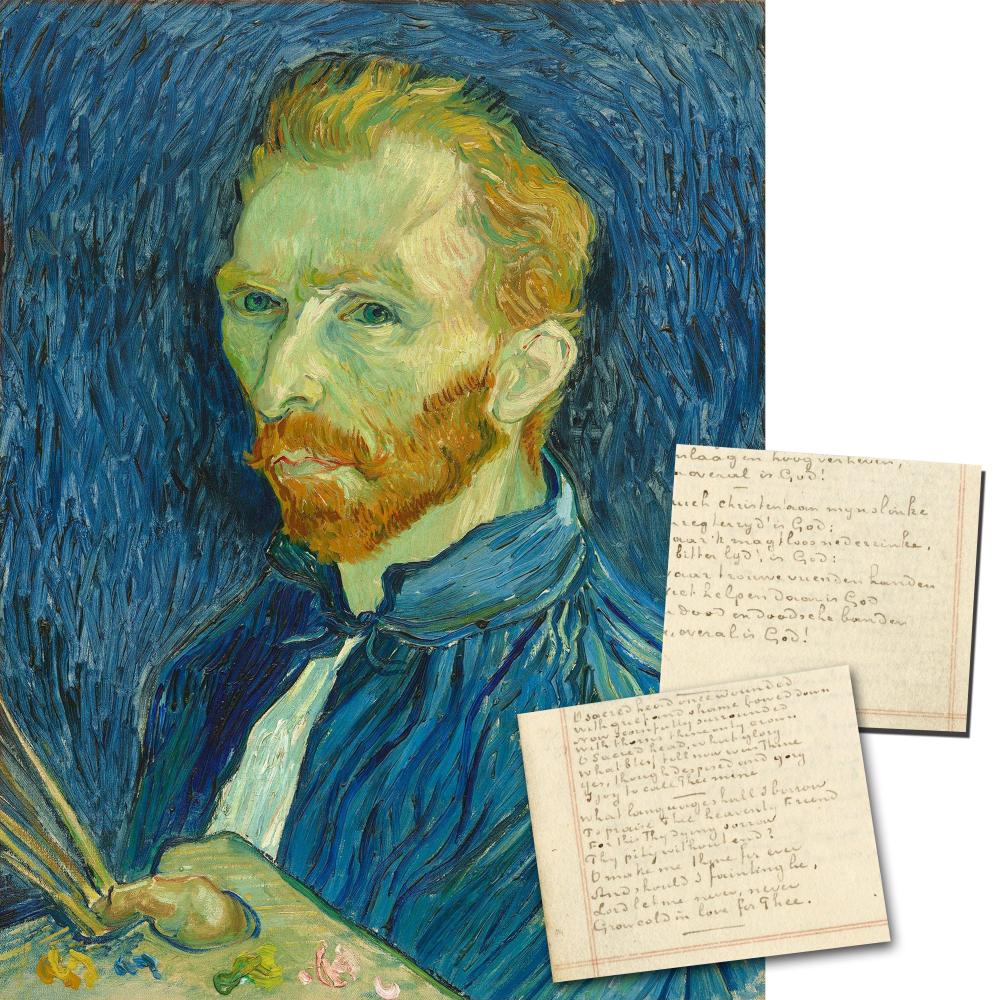 Vincent Van Gogh handwritten hymn verses In English & Dutch, 115 Words, among the rarest and most desirable examples of manuscript in the autograph world. The last full letter to sell was at Sotheby's and it fetched $350,000 nearly a decade ago. A fragment of just over 20 words, arguably inferior in content, was sold by RR Auctions eight years ago for over $50,000! This was the last time an example appeared on the market before the present piece. Of course his original artwork sells in the hundred million dollar range.

A paper fragment inscribed with approximately 115 full and partials words in the hand of Dutch artist Vincent Van Gogh (1853-1890). N.d., but probably the late 1870s. N.p. Van Gogh has copied out two verses in English of the hymn "O Sacred Head Now Wounded" recto, and also two stanzas in Dutch from the hymn known as "Gods Overaltegenwoordigheid” or “God’s Presence Everywhere” verso. On cream red-ruled paper. Trimmed along the top and right edges. Minor  edge darkening. A later collector pen-inscribed Van Gogh's name in the lower left corner recto, which could be removed or matted away. Else clear, bright, legible, and near fine. Accompanied by a transcript of the portion in English. Provenance: Ex-Noel Goldblatt (ca. 1926-2003) of the famous Goldblatt's Department Store, to a prominent Los Angeles, California collector.

Vincent Van Gogh is best known for his moody self-portraits, vibrant floral still lifes, and dramatic Provençal landscapes. But he also served for a brief time as an evangelical Protestant missionary. This remarkable scrap of paper, inscribed on both sides in Van Gogh's hand, testifies to an early period of the artist's life, when Van Gogh sought refuge in religion. Author Cliff Edwards in his monograph, “Van Gogh and God: A Creative Spiritual Quest,” argues that Van Gogh’s early interest in religion was prompted by a desire to find answers to life’s deepest questions. (This interpretation conflicts with the usual reasons offered by historians, that Van Gogh had had a romantic disappointment, or had become morbidly obsessed with religion.) Viewed through Edwards’ lens, everything that Van Gogh did was oriented towards finding spiritual fulfillment. Van Gogh turned to painting after his attempts at preaching failed because it offered him solace in nature, a place where he felt closest to and at most peace with God. Van Gogh wrestled with religion and spirituality throughout his brief, tortured life. His existential restlessness spurred him on towards finding philosophical and spiritual enlightenment.

Van Gogh inscribed the first and eighth stanzas of the well-known Protestant hymn "O Sacred Head Now Wounded" recto. The original poem written in Latin was attributed to a 12th century Belgian Cistercian abbot named Arnulf of Leuven. American Presbyterian minister James Waddel Alexander provided a popular translation of the hymn into English around 1830. There are 80 words found in the two stanzas, all written in Van Gogh's elegant script as follows, in its untouched entirety as:

"O sacred head once wounded
With grief and shame bowed down
Now scornfully surrounded
With thorns thine only crown
O Sacred head, what glory
What bliss till now was Thine
Yes, though despised and gory
I joy to call Thee mine

What language shall I borrow
To praise the heavenly Friend
For this Thy dying sorrow
Thy pity without end?
O make me thine for ever
And should I fainting be,
Lord let me never, never
Grow cold in love for Thee.

On the reverse of the paper fragment, Van Gogh inscribed approximately 36 full and partial words of a Dutch Reformed Church hymn called "Gods Overaltegenwoordigheid” or “God’s Presence Everywhere,” identified as Hymn #143 in some texts. The 4-stanza hymn, attributed to Christoph Christian Sturm, first appeared in an 1806 book of psalms and Gospel chants published by Johannes Allart in Amsterdam. Van Gogh copied out the last two lines of the first stanza, and all eight lines of the last stanza. The first letters of each line (appearing in the transcript in brackets) were lost when the fragment was originally trimmed, but we can extrapolate the original words in Dutch.

Transcript of the Dutch:

The religious subject matter of these poems strongly suggests that the paper fragment dates from the late 1870s, when Van Gogh began exploring Christianity in earnest. Van Gogh appears to have chosen and copied out the hymns with a definite objective in mind. The hymns' emphasis on mercy, sacrifice, and divine love are core components of Evangelical Protestantism.

Van Gogh probably first considered the church because his father and paternal grandfather were ministers. As a young man, Van Gogh studied theology by translating Biblical passages into German, French, and English (of which our example, the paper fragment inscribed with hymns in two languages, is reminiscent.) Van Gogh failed theology and missionary school entrance exams in the Netherlands and Belgium, but he nevertheless was able to secure a six-month-long post as a Protestant missionary in the community of Petit-Wasmes in southern Belgium in late 1878. Van Gogh's zealous undertaking of his evangelical duties alienated local church leaders, and he returned to the Netherlands, depressed and downtrodden, after 14 months. Van Gogh's younger brother Theo suggested he abandon the church and take up art; the rest is history.