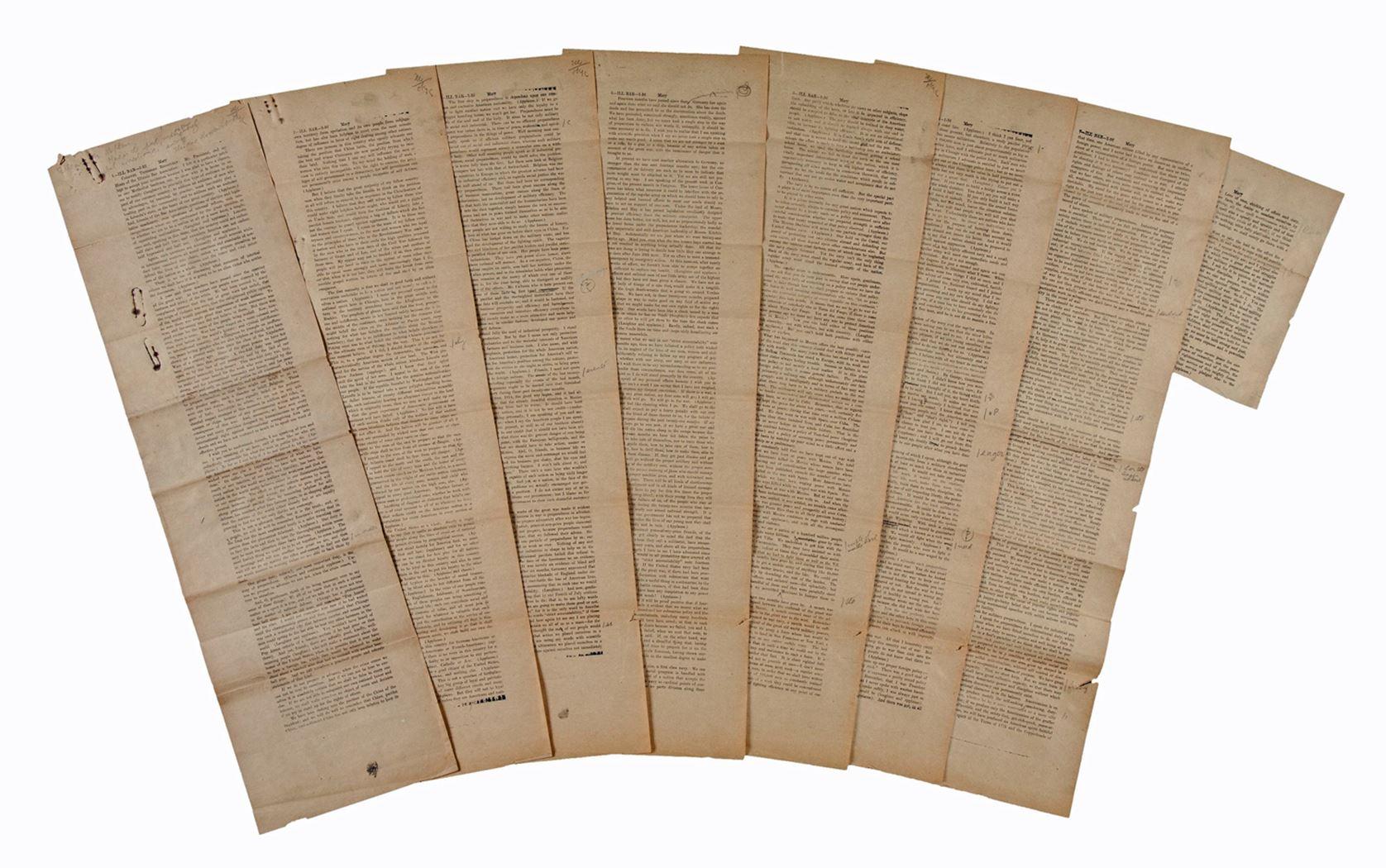 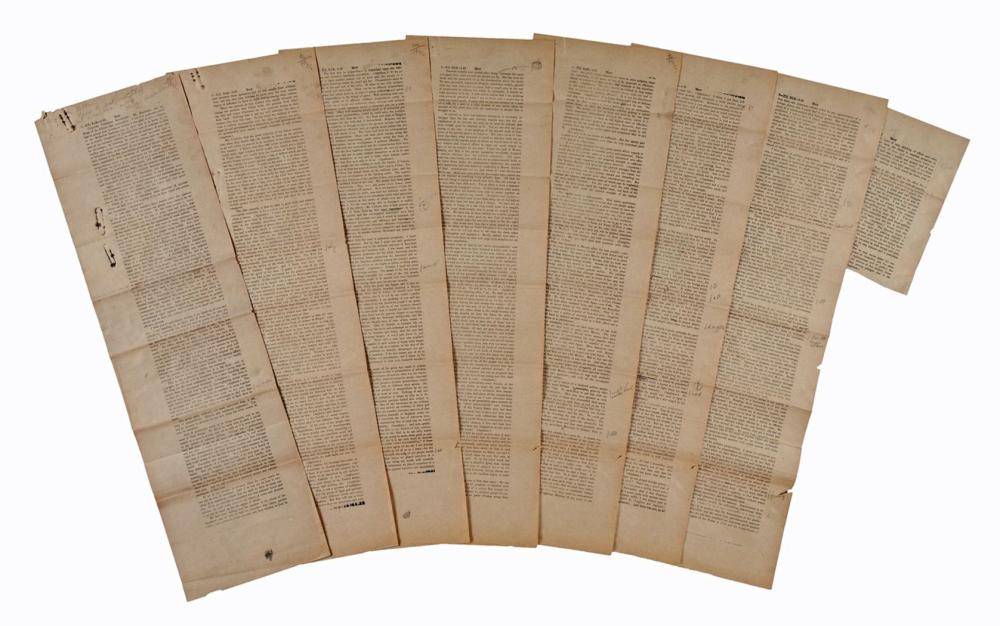 Theodore Roosevelt Most Important Presidential Quote of all Time: "I once used a phrase, to sum up our proper foreign policy: 'Speak softly and carry a big stick.'" Theodore Roosevelt explains his 'big stick'... "I was President seven years and a half and I never spoke with wanton harshness of any nation. I always spoke softly, I was always just as nice and polite as any man could be. But I carried a big stick!"

Printed Speech Signed "Theodore Roosevelt" in pencil, atop the first page. Eight pages 7" x 24", separate sheets (the last page is 7" x 8"). The text of an address by Theodore Roosevelt at a dinner tendered by the Illinois Bar to the Honorable Theodore Roosevelt at the Hotel La Salle, Chicago, Saturday evening, April 29, 1916. These are the proof sheets of his speech sent to TR for his approval.

"Dear Mr. MacChesney, Here is the speech, with a few merely verbal corrections, sincerely, Theodore Roosevelt." Nathan William MacChesney was President of the Illinois Bar Association. In addition to this short note, Roosevelt made 43 handwritten corrections in pencil. The speech, as edited, is printed on pages 761 - 784 in The Proceedings of the Illinois State Bar Association (Chicago: Chicago Legal News Co.,1916).

From the printed text here, in addition to minor grammatical corrections and punctuation marks, Theodore Roosevelt's cross-outs and handwritten edits include, in bold:

"And the Government while encouraging all industry, should so control it as to secure one of the things that the government encouraged should be used to secure should be what has been secured for labor in Germany, proper living and working conditions ^ for the wage workers and provisions for insurance, compensation against sickness and accident and old age." (page 7) Also on this page, TR has changed "trained for this particular work" to "developed, " "the system of an educational order, the small, educational order" to "the," and "fitness of purpose" to "fixity." On page 8, "the desire to comfort ourselves by words that mean nothing" to "flatter."

TR's speech, in part, "Mr. President, and my Hosts of the Illinois Bar Association: I felt it a particular privilege to accept your invitation because I was glad to have a chance, as our Methodist brethren say, to show why it is borne in on me to testify (laughter) to precisely this type of audience in this part of our common country; to address an audience of men who by advantages, by training, by practice, must inevitably play a leading part in the community; and to address such an audience in Lincoln's state, in the heart of our great country. (Applause.) And, friends of the Bar Association, questions of elective and legislative machinery, even questions of internal reform, sink into insignificance when we are confronted by the great question as to whether we are to be a nation at all or a mere knot, a tangle, of squabbling nationalities. (Laughter and applause.) Lincoln once said, speaking in this State, that the country could not endure half slave and half free; and nowadays America can not endure half hyphenated and half not. (Laughter and applause.) …

"Again, such questions are necessarily of small account while in international matters all moral sanctions and standards of conduct have vanished into chaos, unless we prepare ourselves to defend the lives of our citizens and the honor and vital interests of the nation as a whole. (Applause.) … A year and three quarters have passed since the opening of the great war. At the outset our people were stunned by the vastness and terror of the crisis. We had been assured by many complacent persons that the day of great wars had ended, that the reign of violence was over, that the enlightened public opinion of the world would prevent the oppression of weak nations. To be sure there was ample proof that none of these assurances were true, and far-seeing men did not believe in them. But there was good excuse for the mass of the people being misled.

"Now, however, there is none. War has been waged on a more colossal scale than ever before in the world's history; and cynical indifference to international morality, and willingness to trample on inoffensive, peace loving peoples who are also helpless or timid, have been shown on a greater scale than since the close of the Napoleonic Wars of a century ago. Alone of the great powers we have not been drawn into this struggle … I abhor unjust and wanton war. All that I honorably could do would be done to try to keep this country out of war. But I would rather see this country go to war than sink into the dreadful condition where the people do not know that there are things even worse than war. (Applause.) … "

"I once used a phrase, to sum up our proper foreign policy:— "Speak softly and carry a big stick." There was a good deal of laughter over that phrase. But it expresses a pretty sound policy all the same. (Applause.) Remember, that I was President seven years and a half and that I never spoke with wanton harshness of any nation. I always spoke softly, I was always just as nice and polite as any man could be (laughter and applause). But I carried a big stick! (Applause) … "

Condition: Printed on newsprint, the paper has the patina of age. The top page has three paper clip stains. Tiny separations occur at some of the folds, with minor chipping occurring along the edges.

From the Estate of Malcolm S. Forbes.