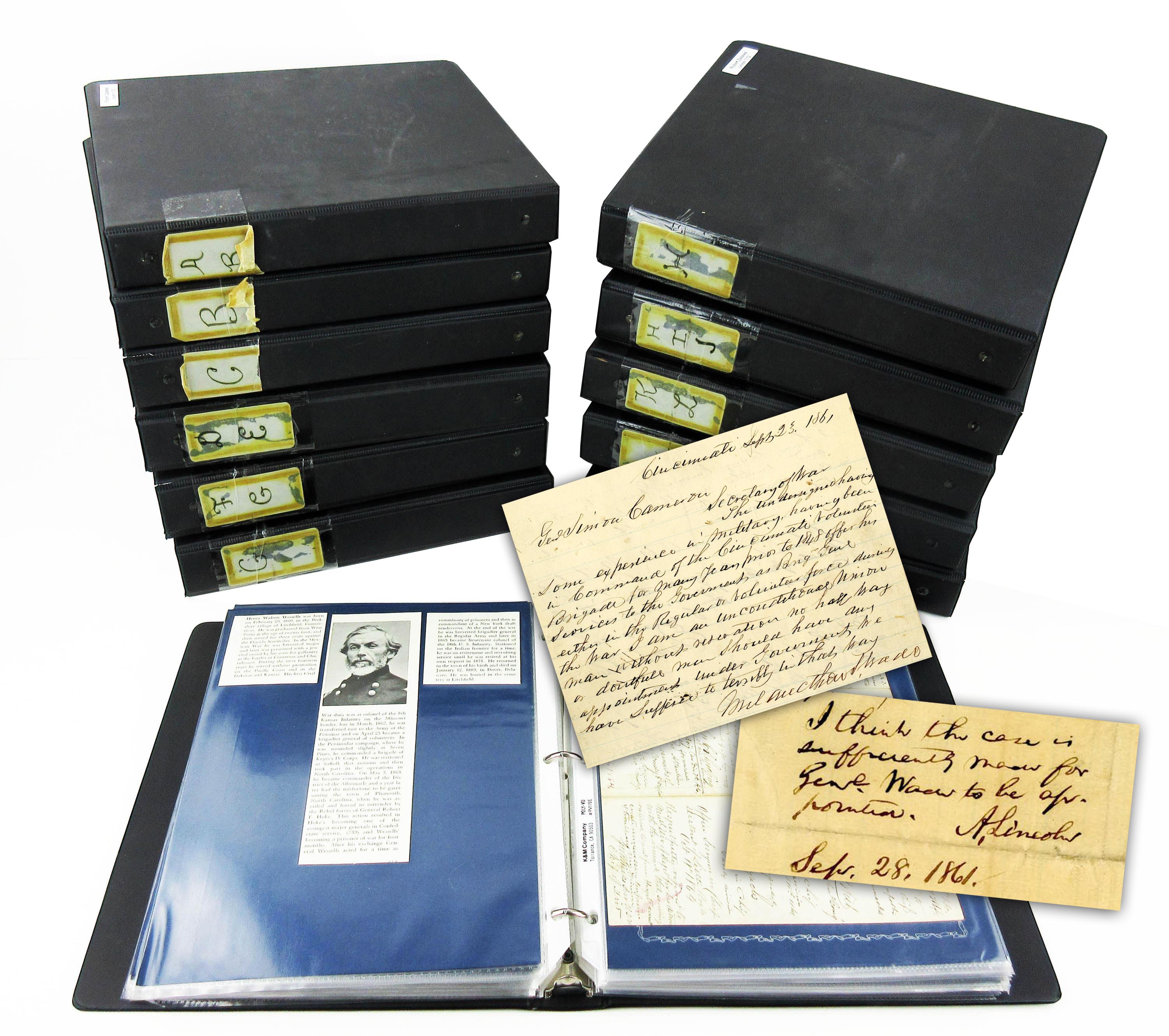 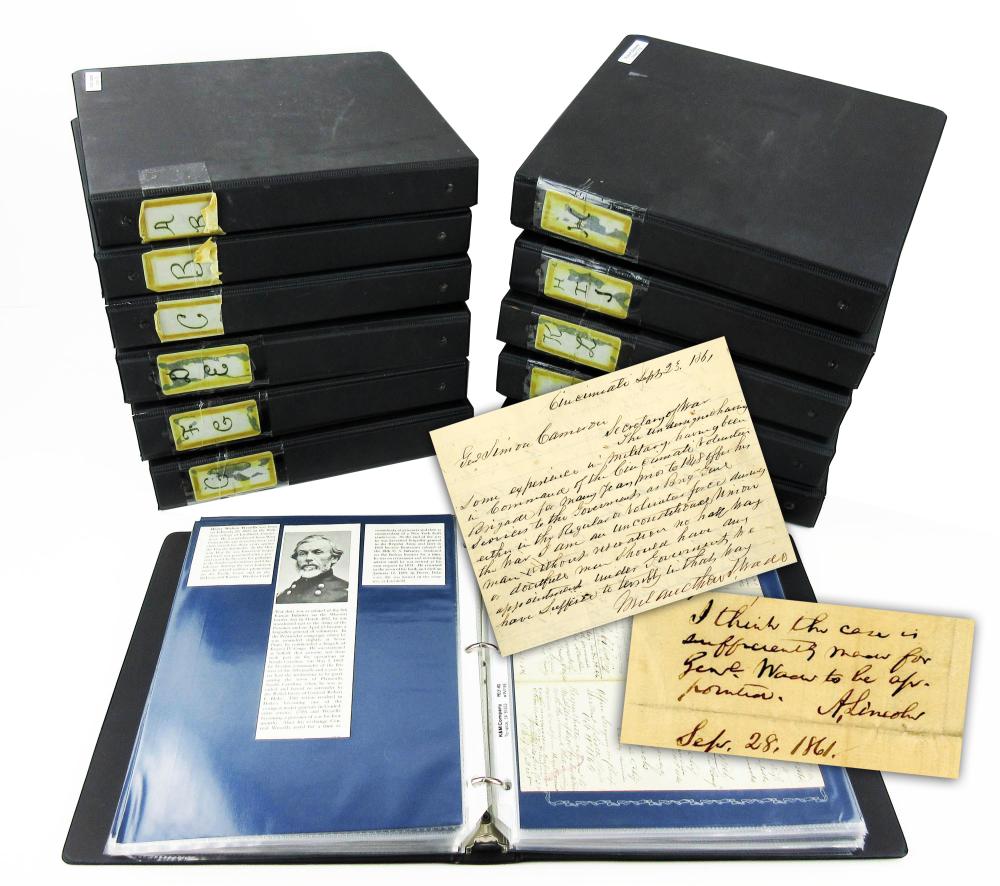 An astounding and extensive archive of signed documents, letters, cards, clipped signatures, cartes-de-visite, etc. of every Union general listed in Ezra J. Warner's "Generals in Blue", as well as an additional 23 generals who are not listed in Warner's but are generally considered to hold the rank of general by Civil War historians. All items have been housed in 12 blue binders, which have been meticulously alphabetized, organized, and displayed by the consigner. Each general has one or more signed and or related items, along with a copy of their biography from Warner's text. In total there are 630 signed items, together with approximately 188 period engravings. The number of items, however, does not reflect the number of generals. There are many multi-signed items; in such cases, the document has been photocopied and filed with the appropriate additional person or persons. All of the generals from Warner's book are accounted for, but some will be on documents with other generals. The binders are organized as follows:

Those included not listed in Warner's "General's in Blue" are Charles J. Biddle, Philip S. Crooke, George F. d'Utassy, Frank H. Hamilton, Benjamin F. Larned, James H. Lane, Benjamin Loan, George C. McKee, George P. Morris, Thomas A. Morris, James Oakes, Robert Patterson, Augustus J. Pleasonton, Thomas L. Price, Jeremiah M. Rusk, George M. Robeson, Theodore Runyon, Charles W. Sandford, Newton Schleich, John T. Sprague, William Sprague, Edward Stanly, Samuel H. Starr, Henry M. Teller, and J. W. Webb. The whole of the archive is well-put-together and displayed, with the items varying in degree of toning, soiling and foxing, tearing, etc. There may be several small flaws that have been repaired. Overall, such flaws are insignificant for a collection of this rarity. Never in the near 40 years of our company's history have we come across such a significant, complete, and well-archived collection. As the archive is so expansive, we highly recommend that interested parties make an appointment to view the whole of the set in person. For those who are unable to do so, below are some highlighted pieces from the collection.

Highlights:
Edmund Kirby ALS "E Kirby." 3pp, Poolesville, Maryland, dated January 9, 1861. Kirby writes from Camp Ramsay to his brother about his studies at college. In part: "…You must decide this matter yourself and then we will talk about a particular college - Yale is my choice however…"

John Sedgewick ALS "John Sedgewick." 1p, Headquarters of the 6th Corps, dated March 27, 1864. Addressed to Mrs. S. L. Dana, writing "It gives me much pleasure to comply with your request, by sending a photograph. My services with the General, your husband, were to me, of the pleasantest kind…"

Melancton Wade ALS "Melancton S. Wade" with Abraham Lincoln Endorsement. 3pp, Cincinnati, Ohio, dated September 23, 1861. Wade signs a petition to offer his and others' service to the US Government, writing "The undersigned having some experience in military, having been in Command of the Cincinnati Volunteer Brigade for many years prior to 1848 offer his services to the Government as Brig Genl. either in the Regular or Volunteer force during the War. I am an unconditional Union man without reservation no half way or doubtful men should have any appointment under Government. We have suffered terribly in that way." Abraham Lincoln has added his endorsement on verso, writing and signing "I think the case is sufficiently made for Genl. Wade to be appointed. A. Lincoln/Sept. 28, 1861."

John Logan ALS "John A Logan Brig Genl." 1p, No place, dated April 10, 1863. Addressed "To all whom it may concern" regarding an ex-prisoner who wished to return to service in the Government. Writing in part: "M.A. Twiss a citizen of Ills, who was taken prisoner at the battle of Belmont and only recently released, being desirous to again be in the employ of the Govt…"

George Meade ALS "Geo. G. Meade." 3pp, HQ of the Army of the Potomac, dated December 17, 1864. Addressed to a Miss Ash, whose brother had been killed and buried during the Battle of the Wilderness, near Todd's Tavern on May 8, 1864. Meade outlines a lengthy plan of action for recovering Miss Ash's brother's body, but cautions her that "This plan would involve considerable expense and trouble, and I think it proper to say would very probably meet with objection at the War Dept. - Still I mention it as the only practicable way that occurs to me, for you to gratify the wishes of yourself and mother."

Winfield Scott Hancock ALS "Winfd S Hancock." Baltimore., dated October 18, 1865. In a letter addressed to fellow General William T. Sherman, Hancock recommends a friend of his. Reading in part: "General Henry Heth late of the Confederate Service, and an old friend of mine from an association of many years in the same Regiment, is about proceeding to St. Louis on a business matter which has met with great favor in this city, among the most reliable business men. I trust you will liken to him and give him such counsel as your cool judgement…"

James A. Garfield AES "J.A. Garfield." Washington, D.C., dated October 29, 1863. Addressed to Hon. E. M. Stanton, recommending Captain Henry W. Johnson to the position of Assistant Quarter Master of Volunteers. Garfield writes, in full: "I do not know - in the whole army of the Cumberland - a more worthy officer than Capt. Johnson. I hope he may be appointed."