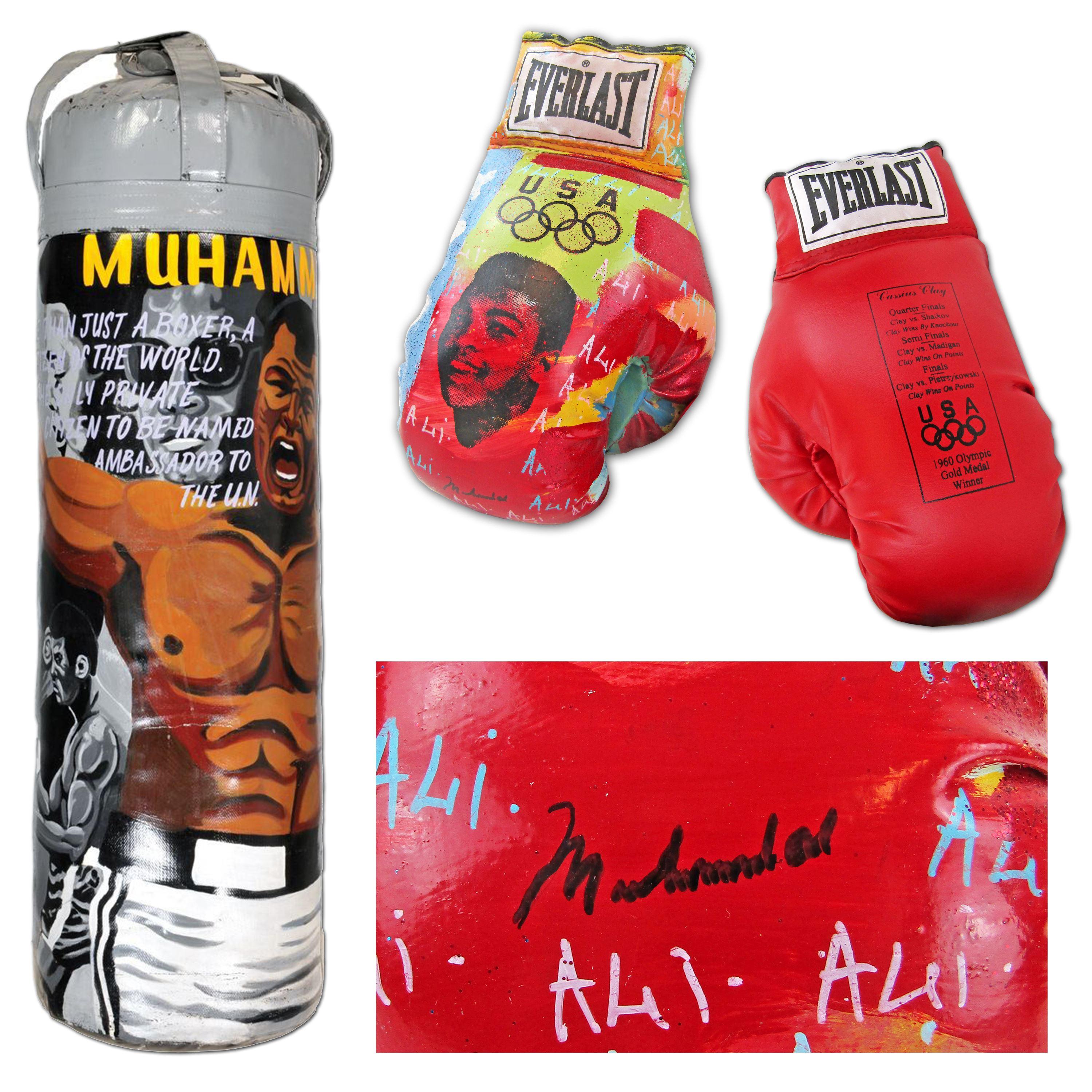 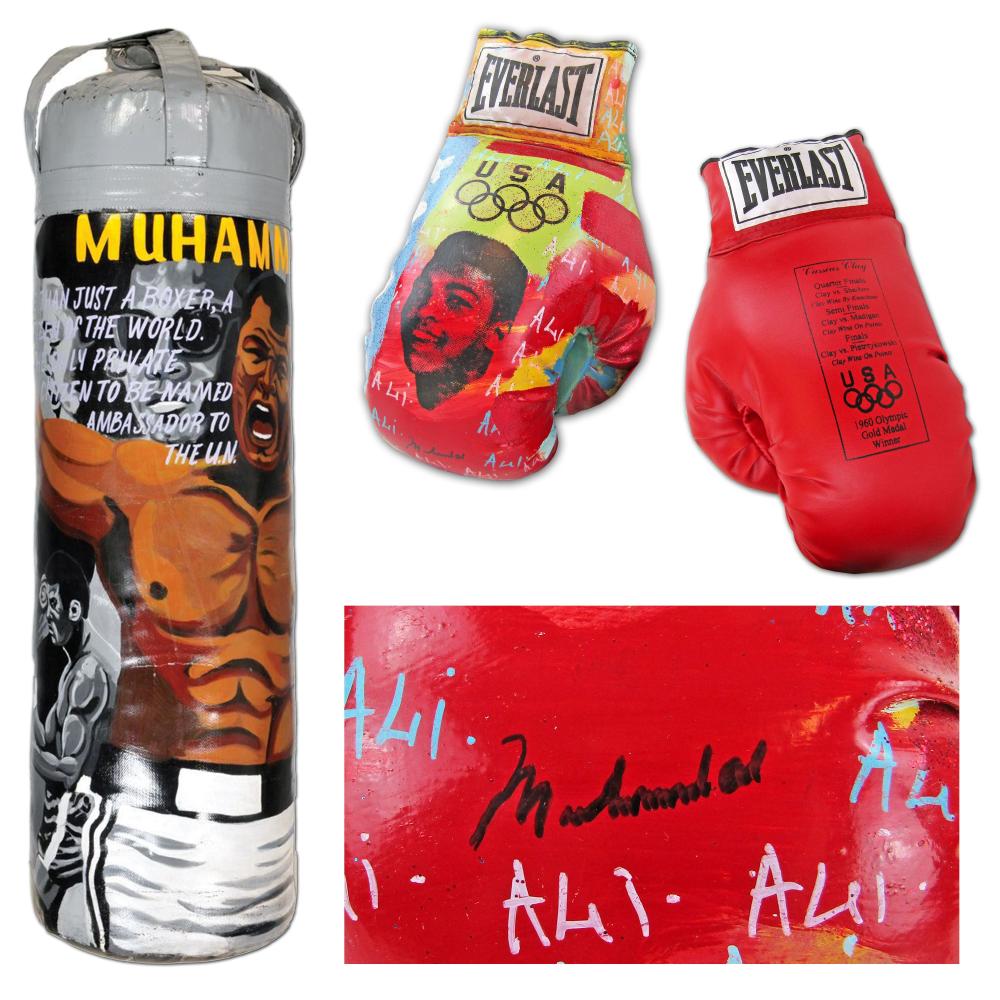 The lot is comprised of:

1. A pair of Everlast boxing gloves in fire engine red leather with black piping and laces, transformed into a limited edition artwork by Steve Kaufman, and signed by Muhammad Ali.

The right glove features the original artwork of Steve Kaufman, who has signed it in the palm as "SAK" (the nickname Andy Warhol gave him) and also inscribed it with the limited edition number "20/250." Kaufman's collage of vibrant paint swatches features multicolored glitter, a silkscreened image of Ali's portrait, an applique of the Olympic rings, and multiple "Ali" text inscriptions. The right glove is signed by Ali as "Muhammad Ali" in black sharpie marker near the curved hand of the glove. The stamp, "Official USOC Licensed Product" appears along the thumb of the glove, along with an 8-digit serial number.

The left glove is hand-painted "14" near the curved hand, and features famous Cassius Clay/Muhammad Ali sports stats printed in a cartouche along the outside of the glove. Expected wear, else near fine. Each glove measures approximately 12" x 7.25" x 4.25."

2. A cylindrical vinyl boxing "heavy bag" featuring an original painting of Muhammad Ali by Steve Kaufman. Kaufman's black marker signature near the top reads, "Peace & Respect - SAK" (some loss to the signature). Ali is depicted triumphantly raising his arms and letting out a roar in the large full-color central portrait, with a dozen black-and-white renderings in the background. A "MUHAMMAD ALI" heading glows yellow, and purple bio lines highlight his global sociopolitical influence: "Ali has met with Russian American and Cuban leaders to talk about peace"; "More than just a boxer, a citizen of the world"; "The only private citizen to be named ambassador to the U.N." Very good condition with incidental minor age wear including crazing and isolated paint loss. 48" tall.

Steve Kaufman once said: “It has always been a dream of mine to paint Muhammad Ali and meeting him was a thrill of a lifetime.” The pairing of a legendary sports figure like Ali with a controversial modern artist like Kaufman is irresistible!

In his 2008 bestseller "Outliers: The Story of Success," author Malcolm Gladwell introduced the "10,000 Hour Rule." That is, if people spend 10,000 hours practicing at anything (or roughly 20 hours per week for 10 years), then they are virtually guaranteed a professional level of excellence. This brings up three questions: How many hours must Muhammad Ali have spent honing his pugilistic skills to become the Greatest? How many thousands upon thousands of crushing blows did he land on speed bags, double-end bags, and hanging heavy bags over his 20-year career? And could there be a more perfect medium for an Ali painting than an actual 4-foot-tall, 80-pound heavy bag, or a pair of iconic boxing gloves?

Steve Kaufman certainly logged his own 10,000 hours and more during his lifetime—and it shows. With these mesmerizing creations, Kaufman demonstrated the full scope of his visionary talents by synthesizing portraiture, iconography, and text into the ultimate epic tributes. Kaufman, while still a teenager, served as an assistant at Andy Warhol's art studio, The Factory, and the early experience shaped his artistic style. Kaufman's celebrity portraits of Muhammad Ali, Frank Sinatra, Al Pacino, Elvis Presley, and others were informed by Warhol's techniques, color palette, and sensibilities.