Back to catalog
Lot 17 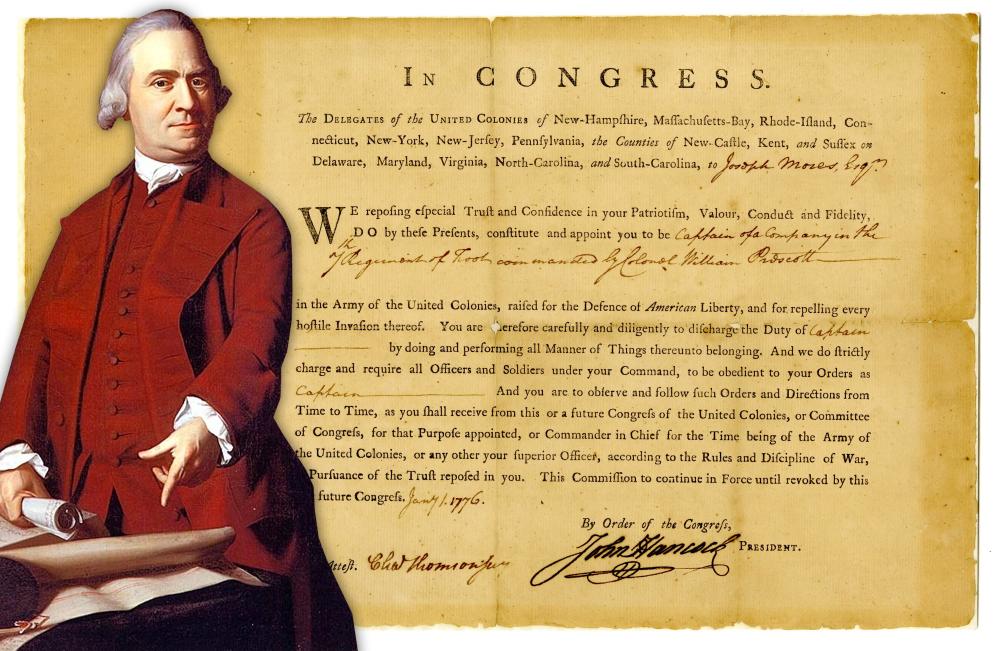 1p partially printed, measuring 15.5" x 10", [Philadelphia], dated January 1, 1776. Large and bold signature "John Hancock", addressed from Congress to Joseph Moses. The document appoints Moses to be "Captain of a Company in the 7th Regiment of Foot commanded by Colonel William Prescott in the Army of the United Colonies, raised for the Defence [sic] of American Liberty, and for repelling every hostile Invasion thereof…" Countersigned by Charles Thomson Jr. The document has uneven toning from previous matting. Sensibly silked on verso. The signature is bold, among the finest we have seen.

In 1774, William Prescott was commissioned to command a company and laid siege to Boston after the Battle of Concord. He was then ordered to lead 1,200 men onto the Charlestown peninsula and erect defenses on Bunker Hill on the night of June 16, 1775. During the battle, Prescott is credited with uttering, "Do not fire until you see the whites of their eyes", now remembered as one of the top military quotes in history. The tactic helped colonial troops shoot more accurately at a close distance and to conserve their limited stocks of ammunition.

Joseph Moses (ca. 1745-1809) was born in Salem, Massachusetts, the son of sailmaker and master mariner. He lived in Salem and loaned money to the government during the Revolution prior to joining the army. He served as a captain of a company in the 7th Regiment of Foot commanded by Colonel William Prescott (1726-1795), from January 1, 1776. The regiment had been raised as a Massachusetts militia regiment at Cambridge, Massachusetts in April 1775 and joined the Continental Army in June 1775.

John Hancock (1737-1793) was an American merchant, statesman, and prominent Patriot of the American Revolution. He inherited his uncle's estate and shipping business, becoming one of the wealthiest men in the colonies, and used his wealth and influence to aid the movement for American independence. He was president of the Second Continental Congress from 1775 to 1777, when the Declaration of Independence was adopted and the United States was born, and later served as president of the Second Continental Congress. After the war, he was elected the first and third Governor of the Commonwealth of Massachusetts, holding the position from 1780-1785, and again from 1787 to his death in 1793. John Hancock is best remembers for his bold and eye-catching signature on the Declaration of Independence, an example which can clearly be found on this document.