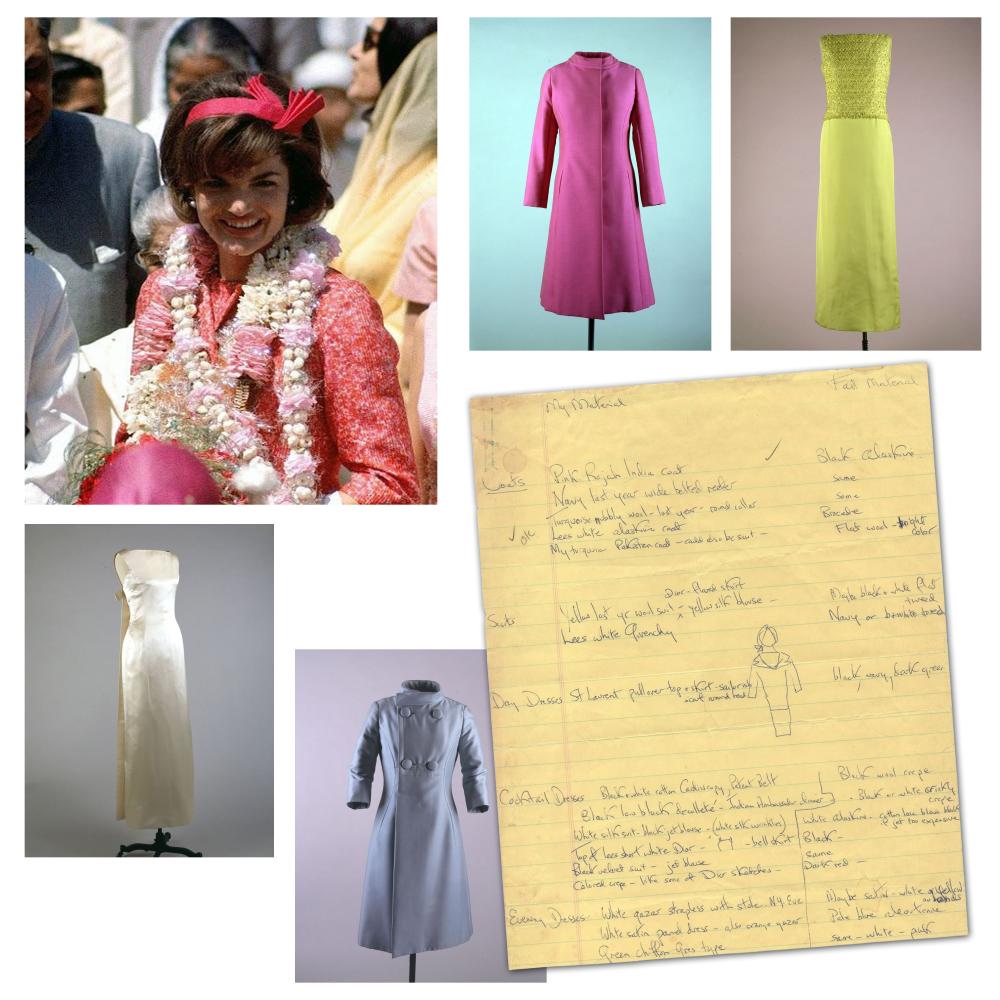 An autograph manuscript of approximately 188 words in the hand of First Lady Jacqueline Kennedy (1929-1994) apparently related to her semi-official trip to India and Pakistan, ca. March 1962. Also including two of Jackie's small sketches. Provenance: From the personal property of the Estate of Oleg Cassini.

Jackie has neatly divided a single leaf of yellow, blue-ruled notepaper into two columns and five rows headed "My Material," "Fall Material," "Coats," "Suits," "Day Dresses," "Cocktail Dresses," and "Evening Dresses" under each of which she has jotted down clothing ideas. She also sketched her idea of what a "St Laurent pullover top + skirt - sailorish scarf around head" would look like, as well as the "Top of Lees [sic] short white Dior." Expected wear including light paper folds and isolated water stains and discoloration, else near fine. 8" x 10."

In part, with original spelling and punctuation:

Jackie evidently used this organizer to plan wardrobe choices for an upcoming trip to the Subcontinent. Her entries refer to prestigious French fashion designers such as Dior, Givenchy, St. Laurent, and Cardin; fabric material such as alaskine, wool, satin, crepe, velvet, chiffon, and gazar and aleoutienne, the last two types of silk; and fabulous colors ranging from pink, orange, yellow, and turquoise to dark green, dark red, navy blue, and black. Jackie's notes were meant to jog her memory; entries included remarks such as "wide belt" or "round collar" or "flared skirt" to differentiate clothing. Occasionally, Jackie refers to age or occasion when distinguishing clothes (ex. "last year," "N.Y. Eve") or even to its true owner, younger sister Lee (ex. "Lees [sic] white alaskine coat.")

Some of Jackie's entries from these handwritten notes correspond to photo-identified garments worn during her two-week-long semi-official trip to India and Pakistan in March 1962. Jackie's trip to the Subcontinent (March 12-26, 1962) became a veritable charm offensive. She was accompanied on her travels by younger sister (and clothes lender) Lee Radziwill (1933-2019). "Life Magazine" estimated that Jackie wore 22 outfits in India alone, so it is more than possible that she actually wore other pieces of clothing mentioned here in her notes.

Two of Jackie's more celebrated articles of clothing from this trip are mentioned in her notes:

Jackie wore her Oleg Cassini-designed "Pink Rajah India coat" upon her arrival at New Delhi Airport on March 12, 1962. The garment was unique not only because of its spectacular bright pink color (which U.S. Ambassador to India John Kenneth Galbraith likened to "radioactive pink"), but also because of its Indian-inspired tailoring and Nehru collar. Indian Prime Minister Jawaharlal Nehru, who greeted the First Lady at the airport, noticed Jackie's homage to India and was apparently captivated. (See attached pictures of the coat for reference. It is currently in the John F. Kennedy Museum Collection; accession number MO 63.1298.)

The First Lady wore her Oleg Cassini-designed "turquoise Pakistan coat" during a parade in Lahore, Pakistan on March 21, 1962. Like her pink coat, the blue coat also had a tab collar. (See attached pictures of the coat for reference. It is currently in the John F. Kennedy Museum Collection; accession number MO 63.1297.)

In addition, it is probable that the "White satin panel dress" and "Green chiffon gres type" evening dress in the "Evening Dresses" section of Jackie's notes correspond to two other pieces found in the John F. Kennedy Museum Collection. These are accession number MO 63.1332 and accession number MO 63.1393a-b respectively. Jackie wore the white columnar dress to a dinner held in her honor on March 13, 1962, and the green dress to a dinner hosted by Mr. and Mrs. John Kenneth Galbraith on March 19, 1962.

Jackie had handpicked Oleg Cassini (1913-2006) as her exclusive fashion designer during the Kennedy administration. Cassini became Jackie's "Secretary of Style" because he had a concrete vision of what Jackie's clothing would look like, and more importantly, what it would represent. He designed 300 outfits for Jackie between 1961-1963. Her evening gowns, day wear, suits, coats, hats, and accessories would create a distinctive "Jackie look" that would mark the reign of the new "American Queen."

Cassini noted in "A Thousand Days of Magic: Dressing Jacqueline Kennedy for the White House" (New York: Rizzoli International Publications, 1995): "Jackie reminded me of an ancient Egyptian princess--very geometric, even hieroglyphic, with the sphinx-like quality of her eyes, her long neck, slim torso, broad shoulders, narrow hips, and regal carriage…I wanted to dress her cleanly, architecturally, in style. I would use the most sumptuous fabrics in the purest interpretations…I was proposing a new look, a new concept, my interpretation of how Jacqueline Bouvier Kennedy should appear in her role as First Lady…[I] told her that she needed a story, a scenario as First Lady. " (p. 15-18)

Cassini's vision of Jackie coincided with her own innate fashion sense and artistic talent, and the two successfully collaborated to set major worldwide fashion trends. In Jackie's wardrobe, you could find all the classic elements of 60s mod--A-line dresses in bright colors and bold patterns, strapless gowns with elbow-length gloves, tailored suits, fur-trimmed coats with oversized collars, buttons, and pockets, and of course, pillbox hats.