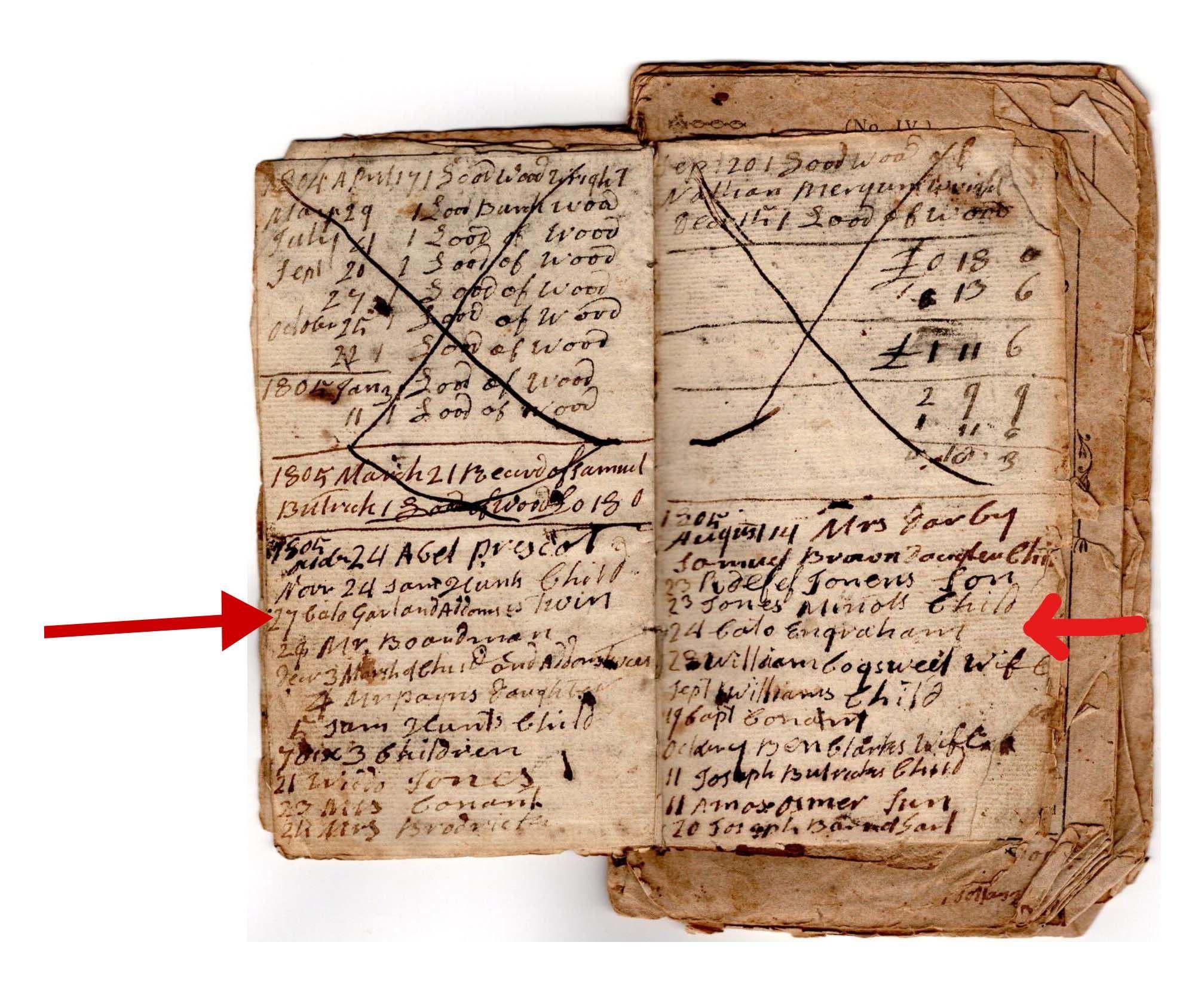 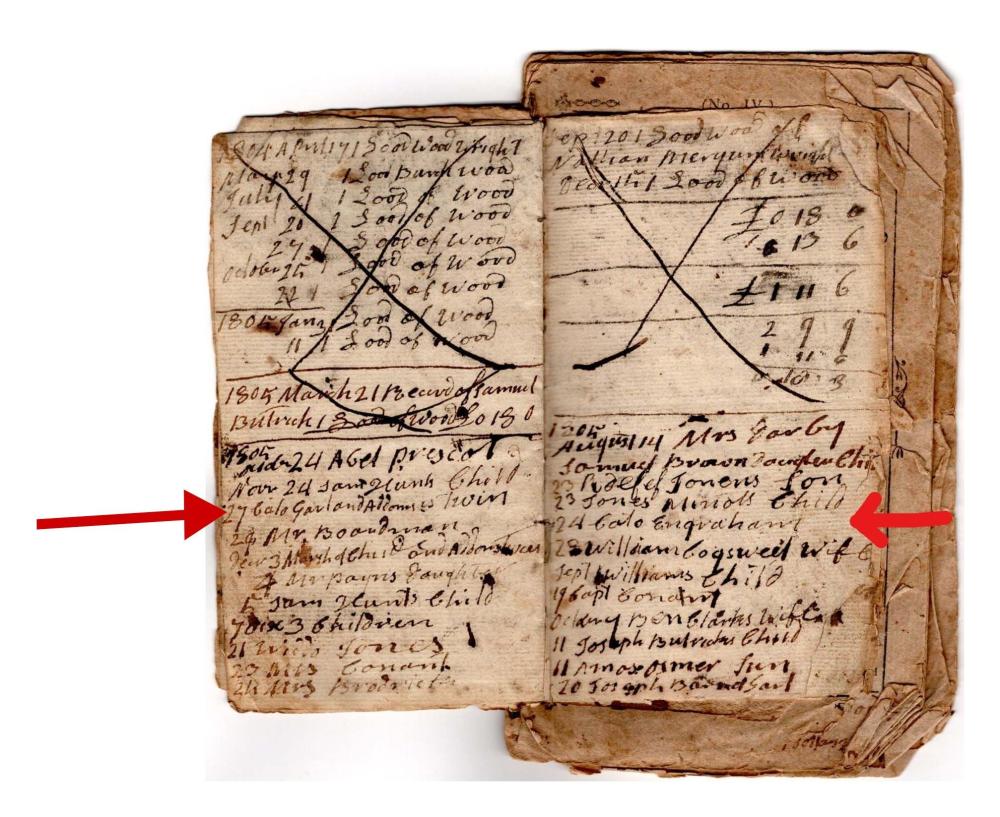 This remarkable account book, kept by James Robinson, is attached to published almanacs for 1807 and 1808. The account book includes charges for making or repairing shoes in pounds, shillings, and pence. It also includes expenditures for wood, bacon, mutton, beef, corn, beans, potatoes, turnips, and other materials. Based on the number of references to soles and shoes, Robinson very probably was a shoemaker.

Historical Background
Cato Ingraham (1751-1805) was the slave of retired sea captain Duncan Ingraham (1726-1811) of Concord, Massachusetts. In 1795, Cato asked permission to marry a local African American woman named Phyllis Bliss (1768-1805). Ingraham agreed to permit Cato to marry but only if he no longer depended on Duncan Ingraham for food and other supplies. Ingraham built a house for Cato on his Walden woodlot, and Cato lived there for the rest of his life. Phyllis had a six-year-old daughter named Nancy, and the couple soon had another child. Cato and Phyllis Ingraham joined a small free black community of former slaves who had settled in Walden Woods.

In 1797, Duncan Ingraham moved to Medford, Massachusetts, and sold the Walden woodlot where Cato and his family were living. Town officials arranged for Cato to rent half of the house where he lived and a surrounding acre of land for 6 cents per year (or day depending on the source of conflicting information) from the new landowner, hotelkeeper John Richardson, to prevent Cato Ingraham and his family from becoming a part of the town's poor list.

Cato could not afford the new rent and at one point traveled to Medford to beg Duncan Ingraham for help, saying he was "out of meal, meat, and wood." Ingraham protested that he would no longer support Cato and his family. Cato responded, "I don't want to hear anymore about that; I tell you I am out of everything." Despite this emotional plea, Duncan refused to give Cato help. As a result, Cato's infant daughter died just 18 months after moving to Walden Woods. Phyllis Ingraham died in the spring of 1805, and Cato died of tuberculosis just a few months later. Three months after Cato died, his daughter Nancy died of tuberculosis at age 16.

Thoreau mentions Cato Ingraham in Walden; or, Life in the Woods (1854), based on Thoreau's experiences from 1845 to 1847:
"East of my bean-field, across the road, lived Cato Ingraham, slave of Duncan Ingraham, Esquire, gentleman, of Concord village, who built his slave a house, and gave him permission to live in Walden Woods; – Cato, not Uticensis, but Concordiensis. Some say that he was a Guinea Negro. There are a few who remember his little patch among the walnuts, which he let grow up till he should be old and need them; but a younger and whiter speculator got them at last. He too, however, occupies an equally narrow house at present. Cato's half-obliterated cellar hole still remains, though known to few, being concealed from the traveller by a fringe of pines."

It is not hard to imagine that Robinson had a special relationship with the Ingrahams so much so as to document the dates of their sad demise. As there are no listings showing a charge for any work done for them it is also easy to see that perhaps the beneficent shoemaker showed charity in this regard, unlike the former master, and did this work for free.

Much of the history of the period and happenings can be found in "Black Walden: Slavery and Its Aftermath in Concord, Massachusetts, by Elise Lemire, but certainly lacking this chapter.

A fabulous discovery and great piece of Americana!