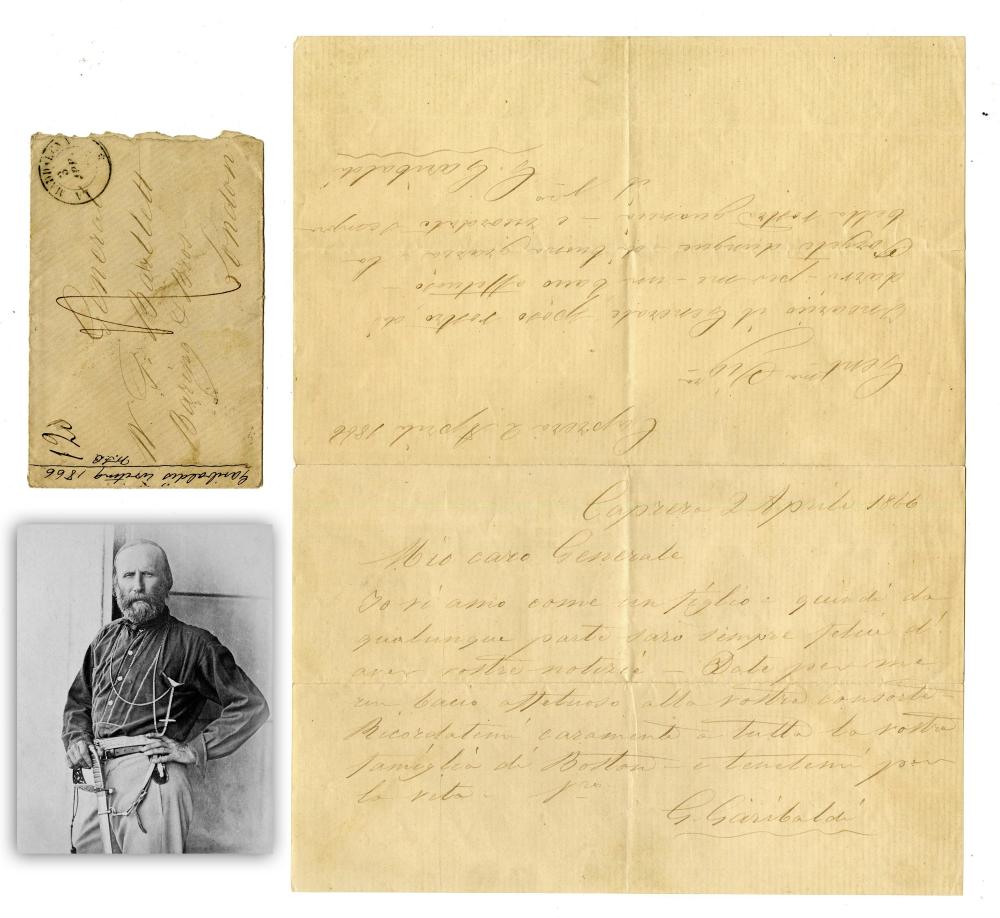 Two complete autograph letters signed on one sheet, measuring 8.25" x 10.5", Caprera, Italy, both dated April 2, 1866. the letters can easily be separated at the mid-horizontal fold to measure 8.25" x 5.25" each. Both are written in Italian and are signed "G. Garibaldi." The first letter is addressed to General William Francis Bartlett, a translation reading: "I love you like a son - so wherever I am I will always be happy to hear from you. Give from me an affectionate kiss to your wife. Remember me dearly to the entire Boston family - and keep me for life, G. Garibaldi." The second is addressed to Mrs. Bartlett and is translated to read: "I instruct the General to give you - from me - an affectionate kiss. Therefore, turn your beautiful cheek with good grace - and always remember me to be, G. Garibaldi." With original envelope addressed by Garibaldi to "General / W.F. Bartlett / Baring & Bros / London." Postmarked La Maddalena, April 3, 1866.

Giuseppe Garibaldi (1807–1882) was an Italian military leader who spearheaded the movement to unite Italy in the mid-1800s. He condemned the oppression of the Italian people, and his revolutionary instincts inspired people on both sides of the Atlantic. He lived an adventurous life, which included stints as a fisherman, sailor, and soldier. His activities led to his exile in 1836, and he spent the majority of his time in South America but also Boston and New York. His exile ended in 1854.

William Francis Bartlett (1840-1876) was a Union general who served with and commanded several regiments from Massachusetts. Over the course of the war, he was wounded four separate times and fought at such battles as Yorktown, Port Hudson, the Wilderness, and the Crater. He also spend two months in Libby Prison in the fall of 1864. After the war, he married Mary Agnes Pomeroy and the couple spent 8 months touring Europe. During this trip, Bartlett spent a night at Garibaldi's home, who he'd made the acquaintance of years earlier when the Italian general had visited Bartlett's father. He later settled in Pittsfield, Massachusetts and died of tuberculosis at the age of 36.