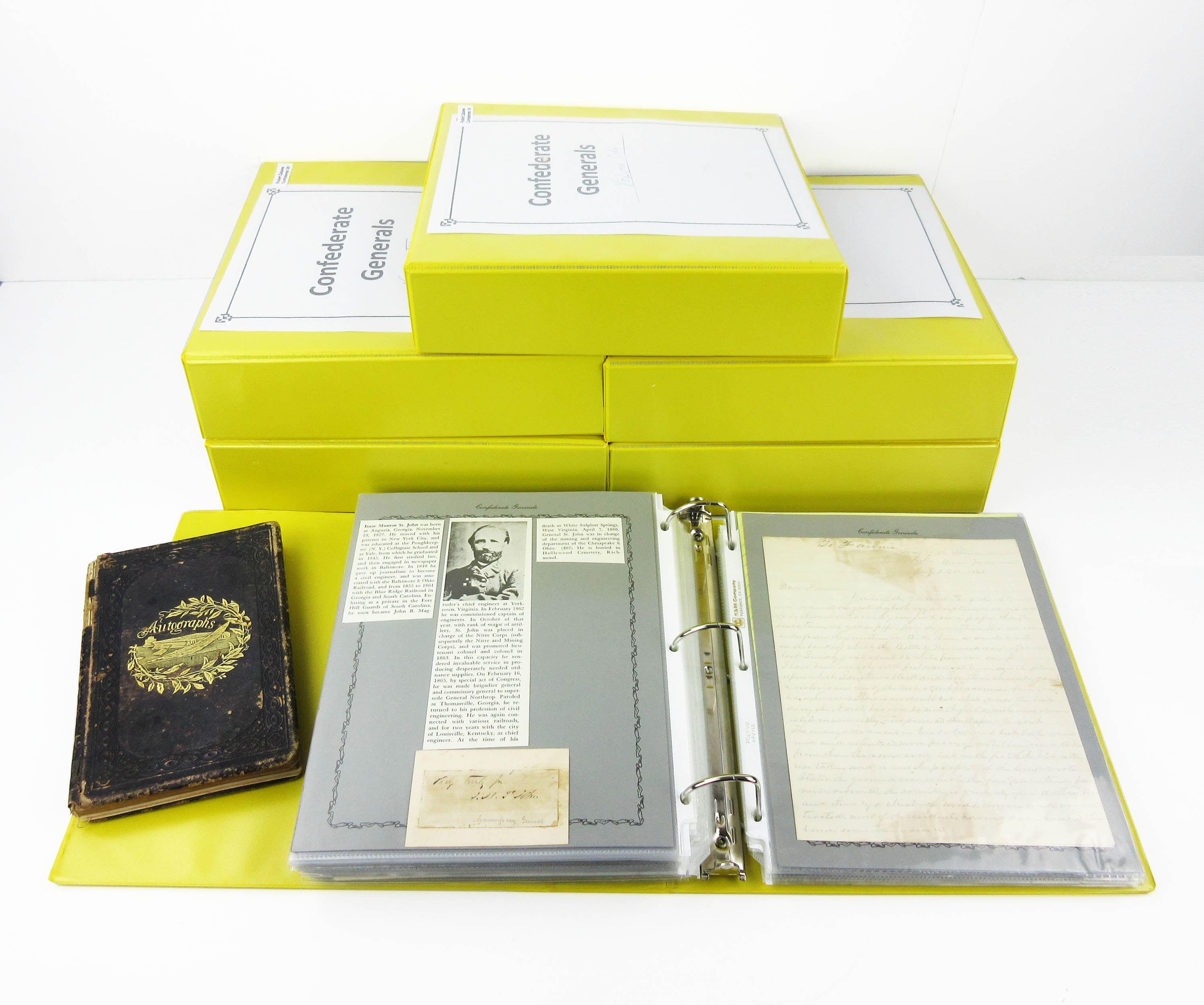 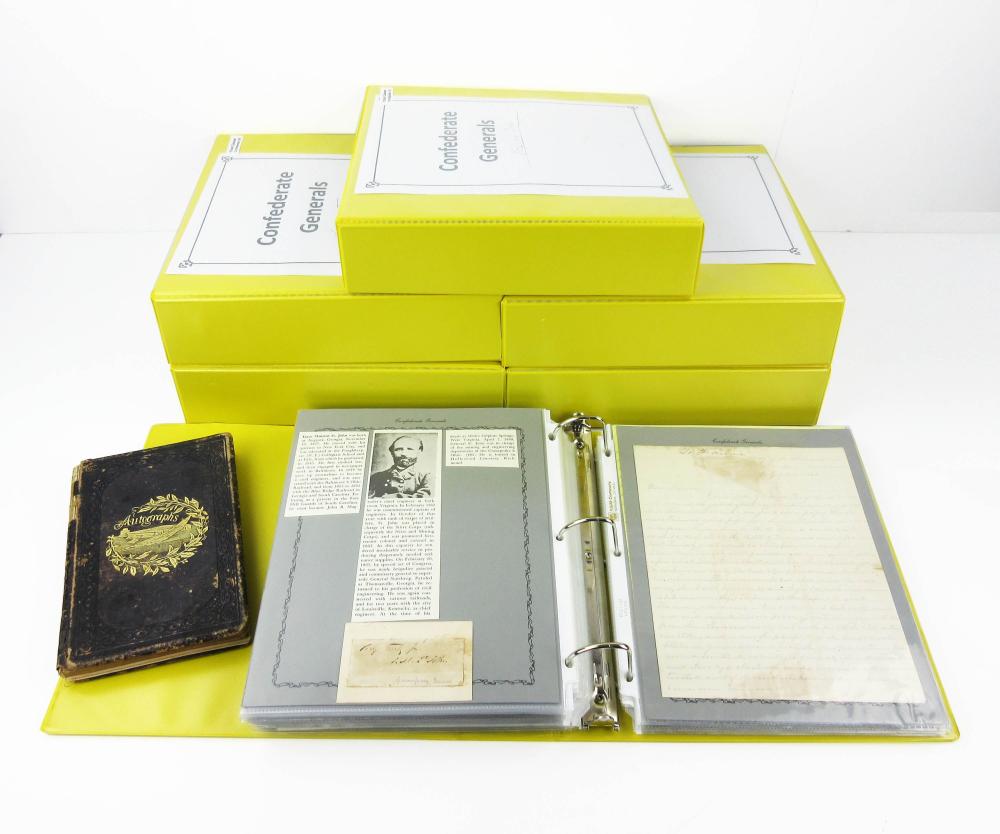 An astounding and extensive archive of signed documents, letters, cards, clipped signatures, cartes-de-visite, etc. of every Confederate general listed in Ezra J. Warner's "Generals in Grey", as well as an additional 72 generals who are not listed in Warner's but are generally considered to hold the rank of general by Civil War historians. All items have been housed in 6 large yellow binders, which have been meticulously alphabetized, organized, and displayed by the consigner. Each general has one or more signed and or related items, along with a copy of their biography from Warner's text. In total there are 528 signed items. The number of items, however, does not reflect the number of generals. There are many multi-signed items; in such cases, the document has been photocopied and filed with the appropriate additional person or persons. All of the generals from Warner's book are accounted for, but some will be on documents with other generals. The binders are organized as follows:

Accompanying the six binders is also an album of signatures from Confederate Prisoners of War, which is full of signatures including 11 CSA Generals, 17 CS Naval Officers, and many politicians from Maryland who were arrested by order of President Lincoln. The total number of signatures is approximately 120, with some soldiers adding information about when, where, and how they were captured. Included are the signatures of Generals William W. MacKall, John Gregg, Hiram B. Granbury, Joseph B. Palmer, William Edwin Baldwin, George B. Crosby, John Calvin Brown, Hylan B. Lyon, Simon B. Buckner, and Roger W. Hanson. There are also several important civilian figures from Franklin whose signatures appear.

The whole of the archive is well-put-together and displayed, with the items varying in degree of toning, soiling and foxing, tearing, etc. There may be several small flaws that have been repaired. Overall, such flaws are insignificant for a collection of this rarity. Never in the near 40 years of our company's history have we come across such a significant, complete, and well-archived collection. As the archive is so expansive, we highly recommend that interested parties make an appointment to view the whole of the set in person. For those who are unable to do so, below are some highlighted pieces from the collection.

John C.C. Sanders ALS 'J.C.C. Sanders." 4pp, Bulls Run near Manassas, dated July 18, 1861. In a letter to his sister, Sanders describes the scenes of the battlefield and its aftermath, along with descriptions of several generals. Reading in part: "I have been over the battlefield several times, saw the plain upon which Southern blood and Southern chivalry gained a victory over one of the best equipped armies America has ever seen…Every country house is either filled now or has been with the wounded of both sides. One church not far from here having about 190 wounded of the enemy in it…On yesterday I had the pleasure of seeing Gen. Beauregard…He is a small man [illegible] about 130 or 140 lbs, looks comparatively young, wears a mustache, looks something a 'French dandy', you can see the resemblance of the French, is getting grey, has a keen eye, eyelids look like they are about half closed…"

JEB Stuart ALS "J.E.B. Stuart." 2pp, Fort Wise, Kansas Territory, dated November 8, 1860. Addressed to the Assistant Adjutant General of the Department of the West. Stuart applies for a remission of a sentence against Private John Harrington of Co. H, 10th Infantry, who had been arrested as a deserter.

Wade Hampton AES "W. Hampton." Headquarters, dated November 8, 1864. Hampton endorses a request for men to drive a herd of cattle out of Virginia, writing "Res. Returned. A duplicate application was approved and given to Maj. Waite."

Robert E. Lee ANS "RE LEE." Headquarters, dated September 8, 1864. Addressed to an unnamed recipient, Lee directs where various troops should be stationed, writing "I think it better to assign this brigade to the Tennessee brigade under Archer - take from Archer the Virginians & assign the latter to duty at Chaffin's Bluff for the present."

James Longstreet ALS "J Longstreet." Headquarters, dated November 20, 1863. Marked "Confidential" and addressed to General Joseph Wheeler. In full: "Wood reports an enemy force in motion near the Rail Road but which could threaten our left flank. You will send a force of 500 at once to look into the matter. Report to me as soon as your force is in place and send at least two couriers with each report."

Braxton Bragg ALS "Braxton Bragg Genl. Comdg." 2pp, Knoxville, dated October 23, 1862. Addressed to President Jefferson Davis regarding future military operations. Reading in part: "As soon as practicable it is proposed to occupy Middle Tennessee in force and if possible to hold for the coming winter the country between the Cumberland and Tennessee Rivers…Our forces are not yet sufficiently assembled to enable me to give a correct idea of what strength we may assemble there, but it cannot exceed 40,000 men part raw recruits…"