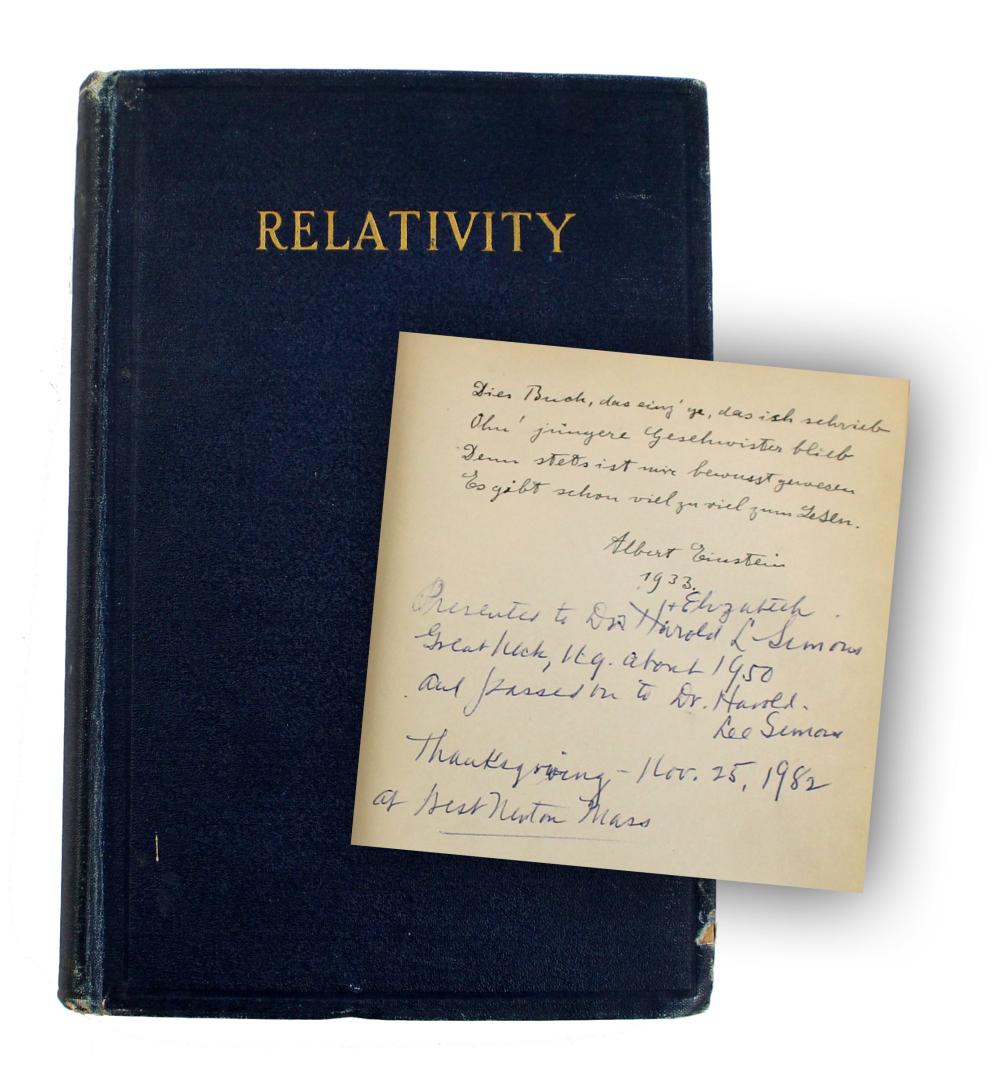 Albert Einstein, Relativity: The Special and General Theory. New York: Peter Smith, 1931. A reprint of the Henry Holt and Co. 1920 edition. Translated by Robert W. Lawson. Octavo. xii, 168pp, including an index. With equations and graphs throughout the volume. Dark blue cloth covered boards, with gilt lettering to the front and spine. A frontispiece of Einstein is present. Signed and inscribed on the front free endpaper, in German (translated):

"This book, unique, among my scribblings,
Remains alone without some siblings,
Because, as I have always believed,
At present there is too much to read.
Albert Einstein 1933"

Beneath Einstein's inscription is an inscription added at a later date, reading "Presented to Dr. Harold L. & Elizabeth Simons. Great Neck, NY about 1950 and passed on to Harold Lee Simons Thanksgiving - Nov. 25, 1982 at West Newton, Mass." The book has bumped corners and spine ends, with light wear. Volume is slightly cocked. Toning to internal pages, with light dampstaining throughout, more present at the first and last few pages. No dampstaining present on the signed page; boldly signed.

Albert Einstein (1879-1955) developed his general theory of relativity in 1915, which is the basis for our current scientific understanding of gravitation in modern physics. The special theory of relativity relates to the relationship between space and time, and Einstein's theory was based on two assumptions: 1. The laws of physics are identical in all frames of reference with no acceleration. 2. The speed of light in a vacuum is the same for all observers, regardless of the motion of the light source or observer.

Elizabeth Reiman Simons (1929-2019) was born in Vienna, Austria, and came to American in 1941 after fleeing Nazi Germany. She studied at Cooper Union and gained a bachelor's degree in Chemical Engineering, becoming the only woman to graduate in her 1950 class to do so. She received her PhD from Yale in 1953, where she met her husband, Harold L. Simons. She went on to run a chemical research lab at Harvard and also lectured on Biochemistry there. She later became a full professor at Boston University of Medicine. With her and her husband's great interest in and love of science, it is therefore no great surprise that they acquired such a unique relic from scientific great, Albert Einstein.