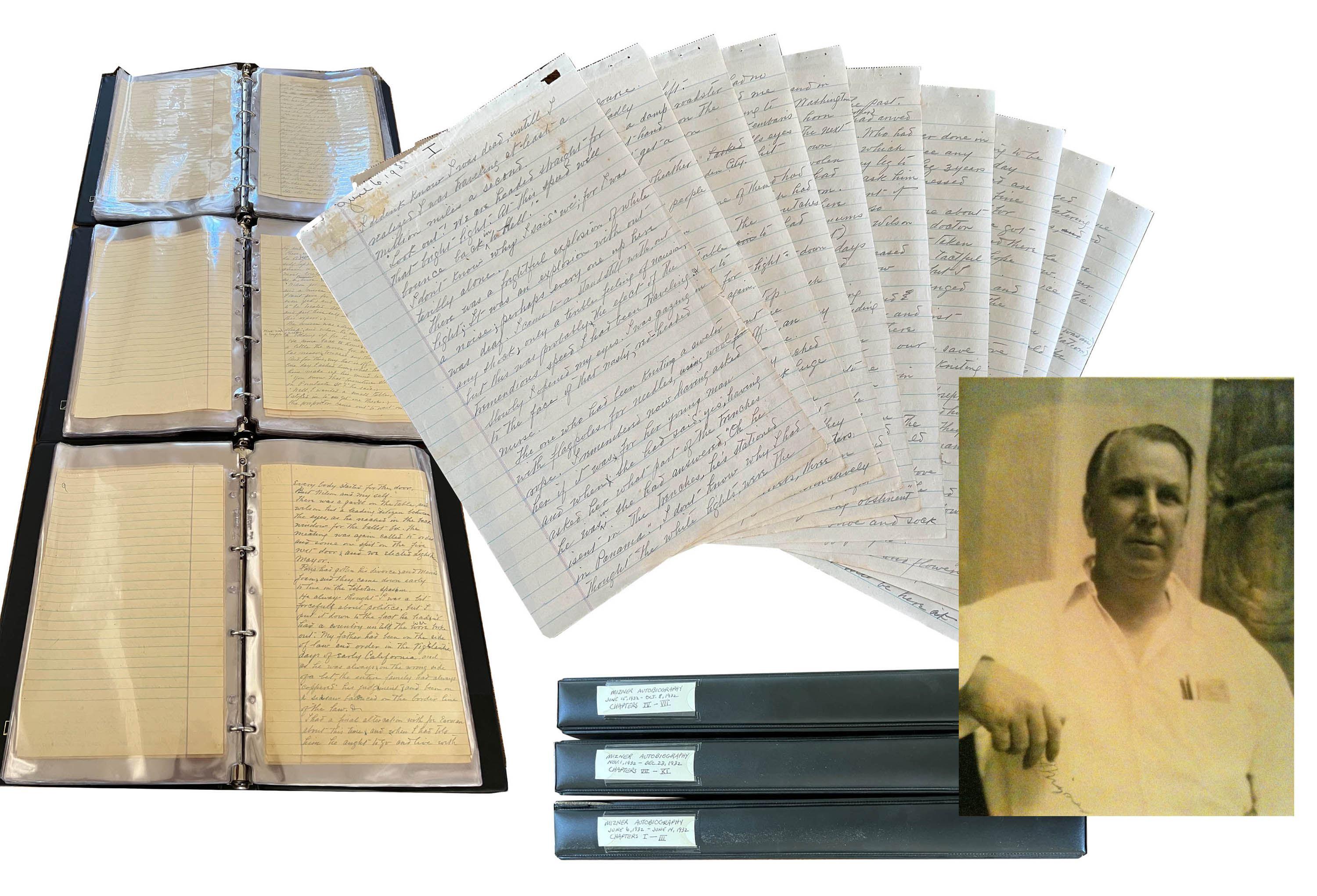 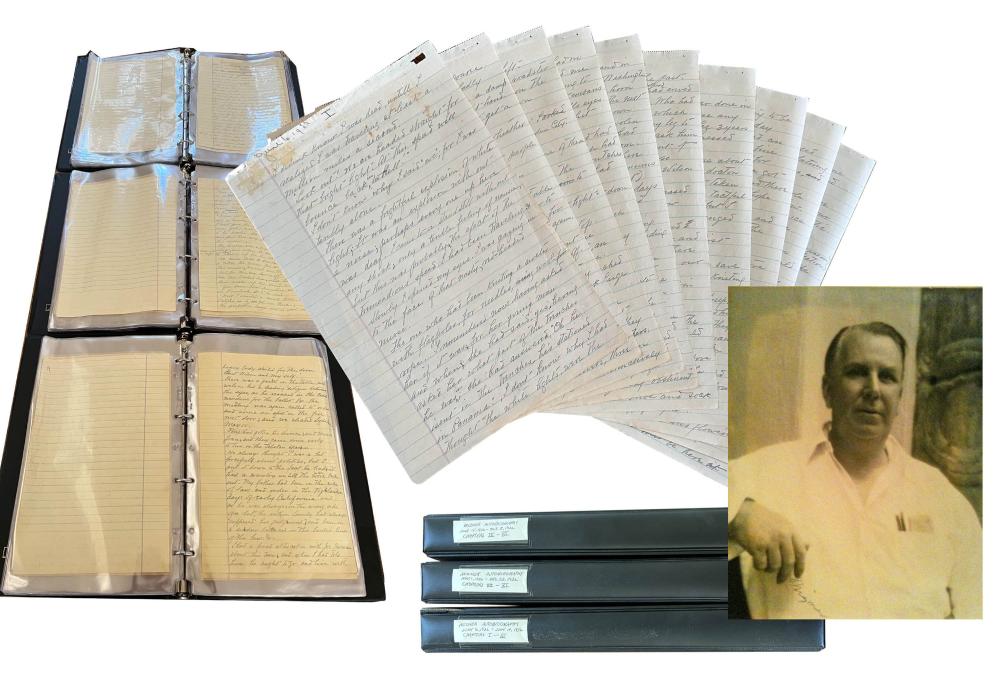 An extensive and historically important archive of items belonging to and related to American architect Addison Mizner, who effectively developed and transformed the houses and land in Palm Beach and Boca Raton, Florida. The archive includes a handwritten copy of Mizner's Opus Autobiography Chapters 1-11 (186 pages), along with personal items and clothing, sketches and pottery, and advertising materials. There are also several antique religious items and décor, dating from the late 17th or early 18th century, which were found amongst Mizner's possessions. In total there are approximately 75 items in the collections. Please refer to the images for condition information. A more detailed list of the items included may be offered upon request, along with additional photographs. Items may also be inspected to those local to the Southern Florida area. Ex. Sotheby's online circa 2000.

Highlights from the collection include:
1. Addison Mizner’s Opus Autobiography, Chapters 1 through 11, dated through December 23, 1932, and consisting of 186 manuscript pages entirely in the hand of Addison Mizner along with 5 typewritten pages heavily annotated by Addison Mizner. The manuscript includes details of his life story, from an attack in New York that threatened his life and injured his leg, to his relationship with Paris Singer and, ultimately, his relocation to Palm Beach, Florida, and taking up architecture. This autobiography is the only firsthand account of Addison Mizner’s experiences during this seminal period of his life, and further research has found no public publication of this work.

3. The “Plan of Palm Beach” personally owned by Addison Mizner, prepared under the direction of the Garden Club of Palm Beach approved by the Town Council. Chicago: Bennett, Parsons & Frost, 1930. Limited to 400 copies, of which this is number 86. Hard covered with marbled paper boards, with 30 heavily illustrated pages.

4. Charter for the Town of Palm Beach (1927) personally owned by Addison Mizner and used as his “office copy”. Published by R. O. Davies Publishing Company, Palm Beach, Florida. Softcover with black binding and black lettering. Contains all of the ordinances for the Town of Palm Beach for the year 1926, including the powers and duties of town officers, the police department, the fire department, plumbing regulations, gas, water, and sewer connections, health and sanitation, mosquito prevention and the like.

5. Boca Raton Mizner Development Corporation advertising materials – booklet produced by Mizner about his proposed development, “Boca Raton”. 32pp, depicting Boca Raton as Mizner’s “Venice in Florida”. Heavily illustrated with color images, copyright 1925, Mizner (Development Corporation, Boca Raton, Florida). This is the only advertising material retained by Mizner and found amongst his belongings at the time of his death, other than the next item.

6. Advertising material depicting available residential lots in Boca Raton. Measuring 19" x 24", this broadside was a sales tool depicting all of the plotted lots of the Boca Raton Development (Plots No. 1 and 2 of Mizner Development Corporation, Boca Raton, Florida).

7. Mizner’s personal clothing. Includes a royal blue cotton jacket with Asian motif including brass buttons, an 18th-century cape made of silk with floral designs, a red velvet cape with decorative collar and silk liner, a red velvet jacket with linen backing and blue silk lining, and a religious vestment of red silk and floral pattern. It was not unusual for Mizner to wear vestments that were emblematic of his flamboyant and artistic personality, but he also threw elaborate costume parties where these clothes would have been used. All were found amongst Mizner’s clothing following his death.

9. Addison Mizner’s personal headboard. This single-size headboard was manufactured at Mizner Industries in West Palm Beach and owned by Mizner. It is possible it may have been a “sample” made by Mizner in an effort to showcase and expand the products produced by Mizner Industries. The headboard consists of two posts decorated in gold and emerald green, with the centerboard depicting a religious figure with gold and coral filigree and an emerald background. The original frame attachment made of brass remains.

11. A wide variety of religious décor, including a bronze church bell, bronze challis, several small crosses, cast bronze mortars, a wrought iron lamp, wall sconces, several carved wood items, and others. These items are either believed to have been manufactured by Mizner Industries or were featured in Mizner's home and found among his personal effects upon his death.

Addison Mizner (1872-1933) was one of the best known and most-discussed architect in America during the 1920s, due to the immense impact he had upon the development of South Florida. His Mediterranean Revival and Spanish Colonial Revival style continues to be seen today. Despite lacking formal training as an architect, Mizner’s eclectic style, as showcased in such famous buildings as the Boca Raton Resort Club and the Everglades Club, grew immensely popular and his services were well sought after. By 1925, Mizner had personified the idea of "Society Architect." His Palm Beach mansions designed for the wealthy and socially elite created both a new architectural style and a new lifestyle for America’s preeminent winter resort. Mizner also believed that the interior and exterior of a property should blend, which is why he founded Mizner Industries to source such furniture and décor as he needed. Unfortunately, Mizner's business came crashing down along with the collapse of the real estate market in 1926 and the company went bankrupt. He continued to take on architectural commissions in the ensuing years, but he never fully recovered and died in 1933 in financial ruin. Despite this fall from grace, the Mizner name still lives on in Southern Florida, frequently found on businesses and street signs and his work continues to inspire architects and land developers to this day.