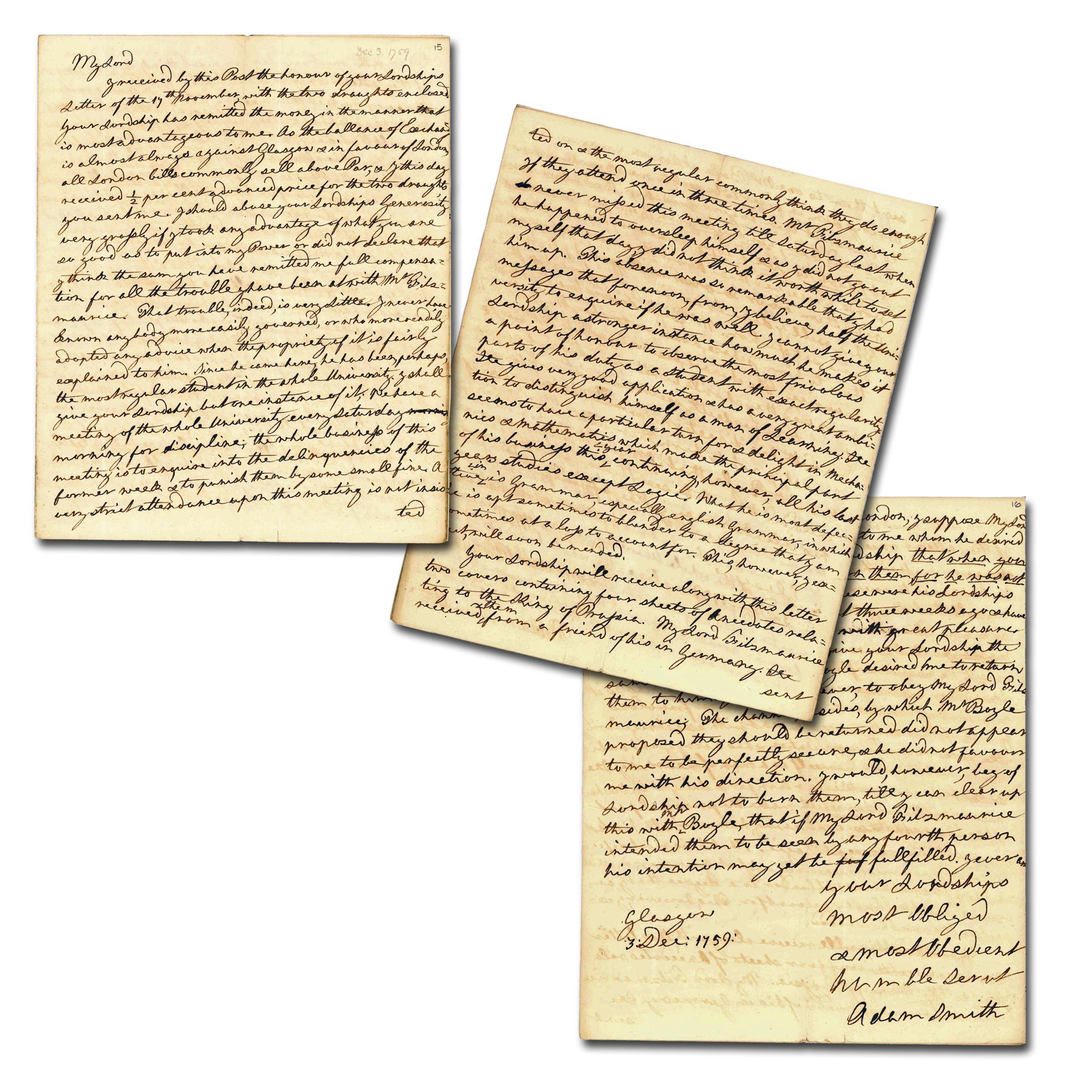 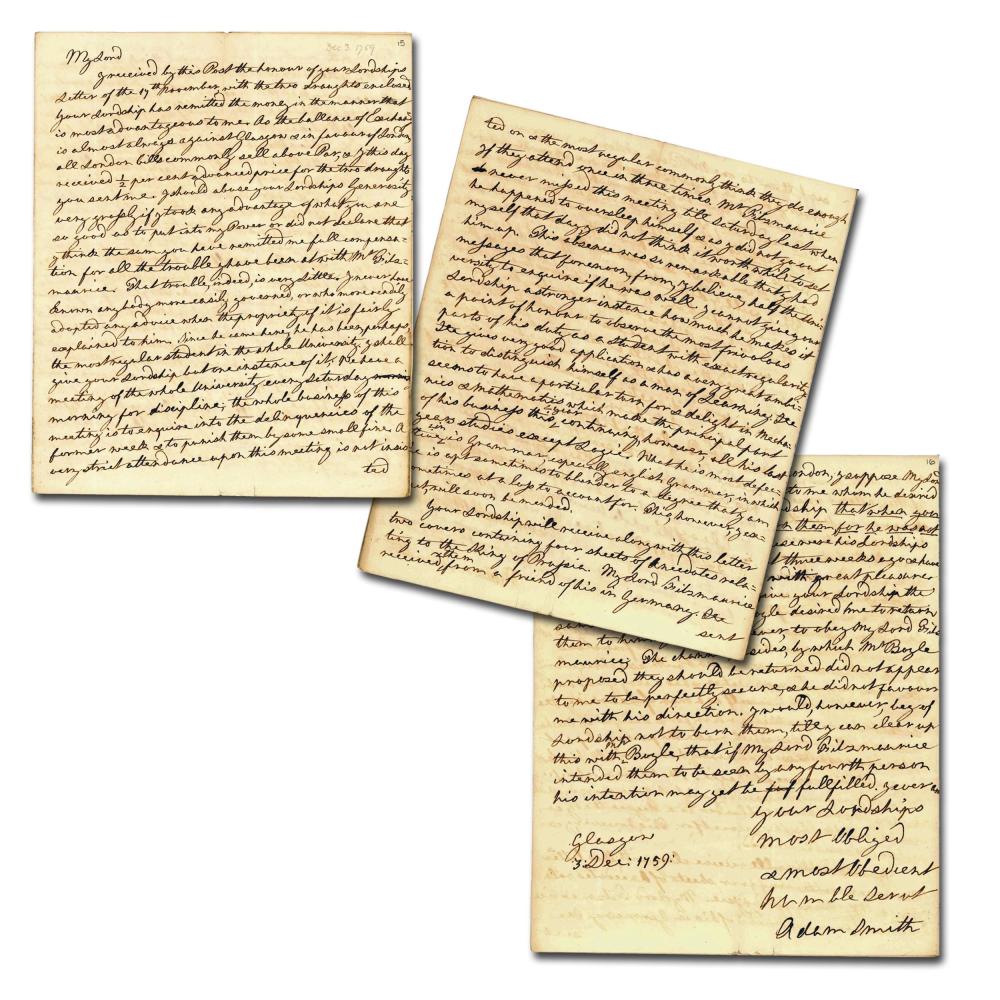 In this outstanding letter, Adam Smith discusses at length financial matters relating to the education of his student and charge, the son of the Earl of Shelburne. Smith writes about the economics of bills of exchange, the inculcation of financial and moral responsibility, and other matters relating to money.

Smith thanks Shelburne for sending two drafts, explaining how he has taken advantage of differences in exchange rates, a subject he would later address in “The Wealth of Nations”. He writes, in part, “At the balance of exchange is almost always against Glasgow & in favor of London, all London bills commonly sell above Par, & this day I received ½ per cent advanced price for the two draughts you sent me …”

Smith discussed the importance of bills of exchange at great length in “The Wealth of Nations”, in which he observed, “The paper which was issued upon hose circulating bills of exchange, amounted, upon many occasions, to the whole fund destined for carrying on some vast and extensive project of agriculture, commerce, or manufactures; and not merely to that part of it which, had there been no paper money, the projector would have been obliged to keep by him, unemployed and in ready money for answering occasional demands. The greater part of this paper was, consequently, over and above the value of the gold and silver which would have circulated in the country, had there been no paper money” (Book II). Smith later explains that, “when a premium is paid at London for a bill upon Paris, it is said to be a sign that the debts due from London to Paris are not compensated by those due from Paris to London, but that a balance in money must be sent out from the latter place; for the risk, trouble and expence of exporting which, the premium is both demanded and given” (Book IV).

Continuing his letter to Lord Shelburne, Smith writes, “I should abuse your Lordships Generosity very grossly if I took advantage of what you are so good as to put in my Power or did not declare that I think the sum you have remitted me full compensation for all the trouble I have been at with Mr. Fitzmaurice. That trouble, indeed, is very little.” He praises young Thomas’s diligence and notes, “He gives very good application and has a very great ambition to distinguish himself as a man of Learning. He seems to have a particular turn for and delight in Mechanics and Mathematics.” In fact, Thomas would go on to establish a linen bleaching enterprise, inspiring a contemporary to write, “The buildings which he has erected, and the machines and apparatus which he has placed in them are really astounding.” Still, Smith notes that Thomas’s English grammar is deficient and that “he is apt some times to blunder to a degree that I am some times at a loss to account for.”

Adam Smith (1723-1790) was named Professor of Logic at the University of Glasgow in 1751, and the following year he became Professor of Moral Philosophy. He remained there until 1764. During this fruitful period, Smith wrote his first book, The Theory of Moral Sentiments, published in 1759, the year he wrote these letters to Lord Shelburne. It was customary at this time for professors to take students into their houses. Smith’s most noteworthy charge was Thomas Petty-Fitzmaurice, younger son of the 1st Earl of Shelburne, the recipient of this letter.
RARE. Only 193 Adam Smith letters are known, all but a handful in institutions. Smith confessed to his friend David Hume “I am as Lazy a Correspondent as you,” but Hume’s letters outnumber Smith’s by a factor of three or more. In contrast, 1600 Samuel Johnson letters survive, more than 10,000 George Washington letters are known, and Voltaire wrote more than 20,000 letters.
Of the 193 extant Adam Smith letters, 24 are known only from published sources, leaving just 169 extant manuscript letters, virtually all in institutions. Smith “almost never retained copies of letters sent. And he was not addicted to letter-writing; so that, compared with correspondence of some other notable persons, Smith’s letters were rather few and short” (Dickinson)
This is a rare opportunity to acquire a long Adam Smith letter on financial matters, representing the pinnacle of economics manuscripts. Provenance: Bowood, home of the Earls of Shelburne.

This item comes with a Certificate from John Reznikoff, a premier authenticator for both major 3rd party authentication services, PSA and JSA (James Spence Authentications), as well as numerous auction houses