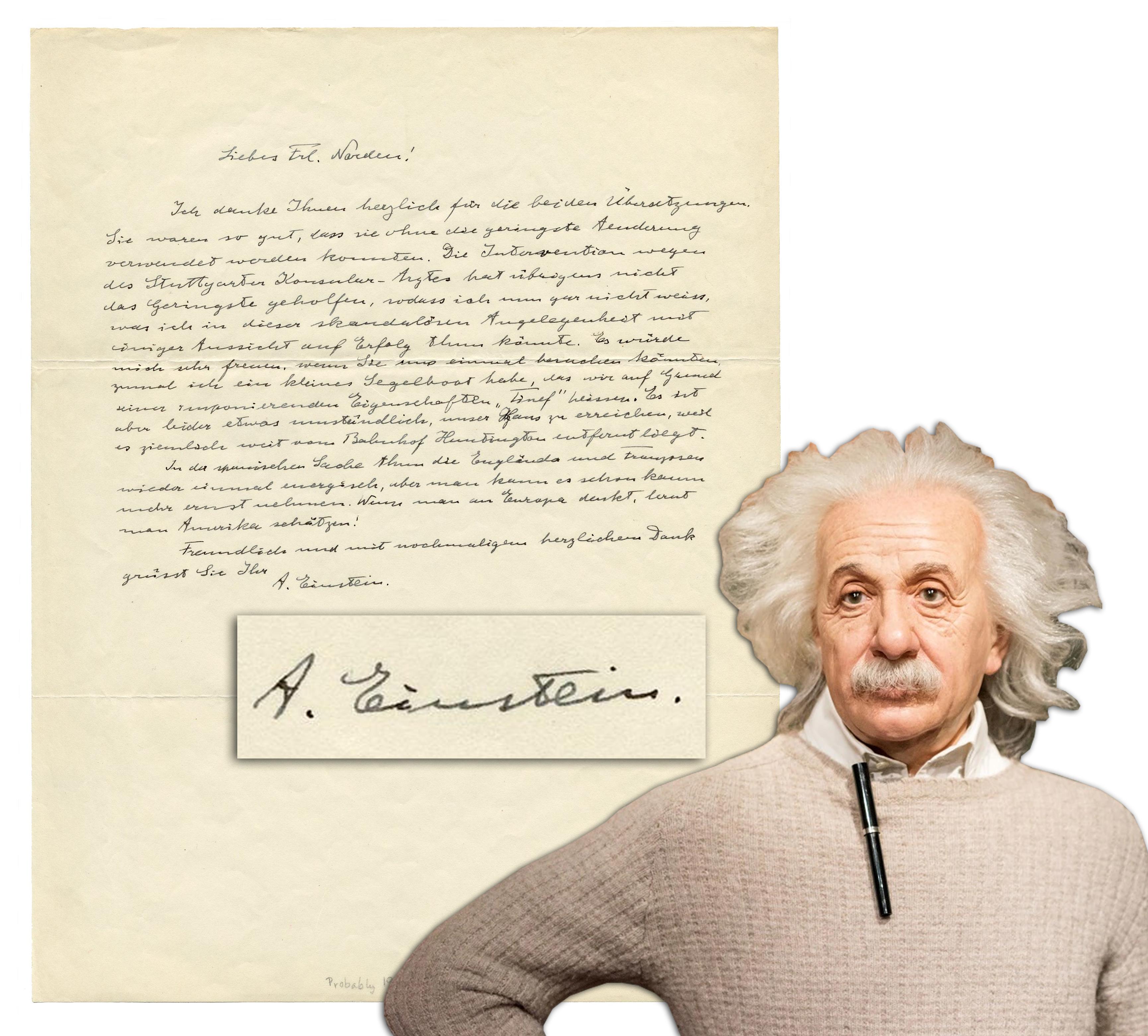 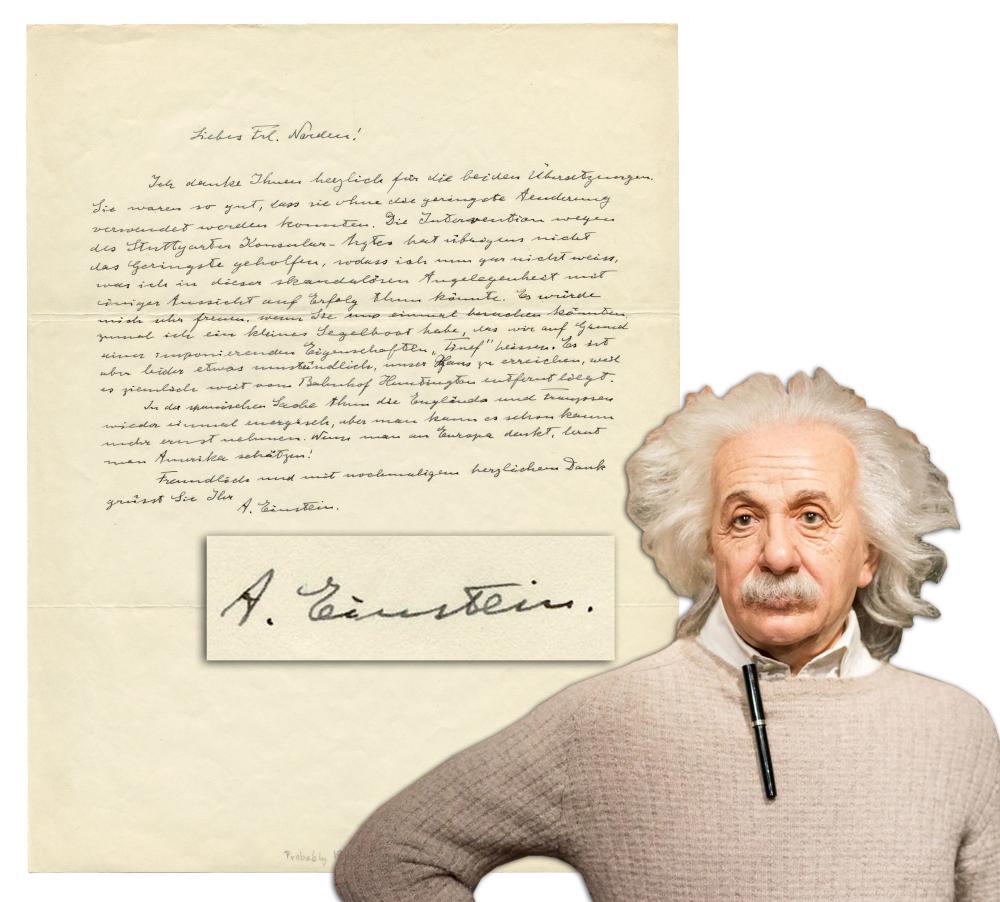 A 1p autograph letter in German signed by Nobel Prize-winning theoretical physicist Albert Einstein (1879-1955), as "A. Einstein" near the center. With approximately 143 words in Einstein's hand. No date, no place, but probably written around June 1937, from Einstein's summer cottage in Long Island. On a single sheet of watermarked cream paper. Expected wear including transmittal folds and a few extra wrinkles, especially along the top edge. A tiny closed tear is located along the top, and a former collector's pencil inscription along the bottom, mentioned just for accuracy. Else near fine. 8.5" x 11." Housed in an attractive dark blue clamshell folder, gilt-embossed "The Raab Collection" on the front cover, and accompanied by the original Raab catalog description which provides a partial English translation.

Einstein wrote this letter to Ruth Norden (1906-1977), his British-born English translator of German descent. Paragraph breaks have been silently added to improve legibility. In part:

"I want to thank you very much for the two translations. They were so good that they were able to be used without the least bit of change. The intervention because of the doctor for the Stuttgart consular, by the way, did not help in the least, so that now I do not know at all what I could do in this scandalous matter that has little prospect of success.

It would please me very much if you could visit us, especially since I now have a small sailboat, which we call 'Tinef' ["tinnef" in colloquial German means "junk" or "worthless"] because of its impressive characteristics. It is unfortunately difficult to get to our house, because it is rather far from the Huntington train station.

In the Spanish matter, the English and the French are acting energetically, but one can hardly take them seriously anymore. When one thinks of Europe, one appreciates America!..."

In January 1933, Adolf Hitler had been appointed Chancellor of Germany and ramped up the persecution and harassment of German Jews. Einstein formally renounced his German citizenship in March 1933 and moved permanently to America in October of that year. For Einstein, the United States was a refuge where he could live peaceably and continue his important scientific research. Einstein sought out the United States "because of the great, great freedom which I heard existed in this country." Einstein applied for U.S. citizenship and received it in 1940, saying then that "America is today the hope of all honorable men who respect the rights of their fellow men and who believe in the principle of freedom and justice."

Elsewhere however, especially in Europe, state-organized Fascism menaced the world's democracies. In 1936, the Nazis had invaded the demilitarized Rhineland, breaking the terms of the Versailles Treaty. Insurrection broke out in Spain, with Francisco Franco's Fascists supported by Hitler's Germany and Mussolini's Italy. Einstein was referring to the ongoing Spanish Civil War when he wrote Ruth Norden regarding "the Spanish matter."

On April 26, 1937, the German Luftwaffe and Italian aviators had bombed the Basque town of Guernica in what would prove to be one of the first of many instances of civilian-targeted terror bombings. Over 1,600 people were killed at Guernica. The incident distressed and enraged Western Europe. Great Britain and France ["the English and the French are acting energetically"] offered support to Spanish refugees, but the pro-democratic insurgents fought on mostly alone. Though there was popular support in America for the Spanish Republican cause, Franklin D. Roosevelt did not want to become involved in the European wasp's nest. In 1937, then, the European political and military outlook truly looked grim, and America seemed a safe haven in contrast.

The political content of Einstein's letter, as well as his reference to Huntington Train Station, enable us to pinpoint the date of the letter to the summer of 1937. Einstein and his family rented a summer cottage on West Cove Road, off Nassau Point, in Cutchogue, on the north fork of Long Island in 1937, 1938, and 1939. The relaxed Einstein pottered around the beach in rope-tied shorts and women's sandals, often sailing "Tinef," his 17-foot-long boat, into Horseshoe Cove. Einstein was a terrible sailor whose reckless ignorance of basic seafaring often necessitated rescue by the locals, though everyone agreed he loved the open water.

Ruth Norden would translate Einstein's article, "Why Do They Hate The Jews?" published in "Collier's Magazine" in November 1938. This was Einstein's only public discussion of Hitler's campaign to persecute and exterminate Jews.